Saturday, 11:24 a.m. UPDATE: Change of plans. Ed is getting the cats settled in the house and then will head to Sheila’s for the duration. She’s two-plus floors up and in a bunker building. There’s a bunch of them crammed into a small space, but, hey, it’s Key West, so a party most likely will follow and they do their best to make it through the next 36-48 hours. We decided to let the cats roam free in their home rather than cage them. Those are our babies; enough said. That’s something I neither care to think or speculate about.

ED AND THE CAT 5s: Saturday, 8:21 a.m.: Ed’s going to the Key West high school “last resort” shelter later today. He’ll walk over, about 2 miles. Going to try to get a couple of our neighbors there, too. 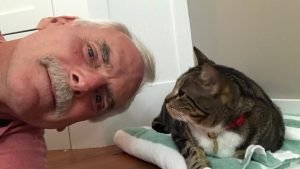 Cats probably going into their carriers and into the attic. We can’t let them roam the house because if it blows open, they’ll escape and drown. We’d rather they yell and poop in their carriers for 36 hours than escape into danger. If the house makes it through, Ed can rescue them.

Our house is located in an X flood zone, one of the higher places in Key West, about 7.5 feet about sea level and the structure is another 3 feet up. Ed relocated valuables, etc., even higher in the house. A 10-foot storm surge is maybe (barely) manageable. But, even though we’re buttoned down as well as one can, we think the high school is a better choice. He’s going to move the car to a slightly higher block in the neighborhood.

He’s got no wifi, so don’t send emails. But his cell is working — for now. I’ll keep you posted here. Ed’s got too much to do, and while we understand your concerns, we need to keep extraneous drama off stage.

This all sucks, my friends. Ed and I made the hardest choices of our lives on Wednesday, Sept. 6. He staying there to care for others; and me here in Virginia to be with my mother. I was to return to the island Sept. 6. And, though I wish I were there with him, I know we made the right decisions, at the right time, for the right reasons.

Our beloved son in Atlanta, E.Lee Cunningham, and his family (Sarah Biel Cunningham) are taking in cousins evacuating from Tampa (Melissa Morral Cooper).

Show me my path. Teach me along the way. Grant me peace. Sustain my hope. Re-direct my anger. And, let me laugh.