For seven days we have shared the (cliche alert) roller coaster that began with believing Key West and the Keys might be spared the worst of Hurricane Irma as the predicted path of the Category 4 storm headed up the east coast of Florida. Wibble wobble back and forth until the storm crashed into Cudjoe Key, leaving Key West on its westerly and slightly less horrific backside — at low tide. Had we collectively ordered from a hurricane menu, Key West could not have been more delighted with the result.

As most know by now, I was in Virginia with my mother when the storm hit. My husband, a park ranger at Fort Zach, remained in Key West because of personal commitments. He and our five cats, appropriately, I think, designated the Cat 5s, our house and our neighborhood escaped almost unscathed the storm’s damage.

That’s what we know today. The nightmares of a week ago are fading. A week. Just a week. The flooding receded. The downed trees and debris are being removed. Lights turn on across most of the island. Cell and data service means we’re texting and sticking our heads into our hands-cum-phones. Gasoline, food, construction and repairs supplies remain in short supply, but stock is coming down the Keys and I’m betting Jeff Bezos is going to have Amazon Prime deliveries back on track in a week. Running water remains at premium, and thus toilet flushing is a luxury. That, too, will resolve itself.

Each hour there’s a growing sense that everything is OK in Key West. I suspect, though, that those of us who are off-island have a slightly rosy view of how things are. Photographs and videos of bright sunshine and intact homes don’t smell. They aren’t hot and sweaty. They aren’t swatting mosquitos. And, our focus on what Key West and the Upper Keys escaped belies the destruction between the two.

Not for those communities a return to air conditioning and some hard work with bleach and a chain saw. For them, there’s little left except the catastrophe of not knowing what to do next. That could as easily have been Key West on Sunday morning. As we celebrate our great good fortune, may we forebear doing so at the expense of our neighbors and friends, Our sister islands need us, the fortunate ones.

A week ago I was a Facebook post or a column away from panic. To know that in mere hours everything that makes my life my life could be swept away was paralyzing and so I keep posting, kept writing. This is what I wrote last Saturday night:

Tonight, though, I am swatting my errant, apprehensive imagination. Because what’s in my brain has kept me sleepless for three days and its relentless stranglehold drives me to write. One of my bosses used to call me the “Ice Queen” because not even the worst in front of me brought tears. This is no Henny-Penny. I can stay focused and on task in chaos. I pay a price for that stoicism, but it is who I am and almost seven decades in, God isn’t going to bother to make sweeping changes.

Tonight, I’m tired. I know you are as well. Humans can’t absorb that much emotional hurricane and come away unscathed. I am glad we have been together this week. Without you, John Teets and I would not have kept at it for virtually 24-7. We did what we did because we’re old, “warhorse” journalists who cannot imagine deserting our community. We did it because, well, at the time, no one else was.

We stopped counting when we reached 800,000 people. More than 220,00 video views. In. One. Week. We knew if we needed the information, so did others, but we never expected an audience this size.

But, you know what was best of all? The sheer civility of this community. No trolls. No mis-directed anger. In a world where social media has become a swamp of bots, trolls and angry pejoratives, spending the week with you has been an affirmation that most people are good people. Thank you. 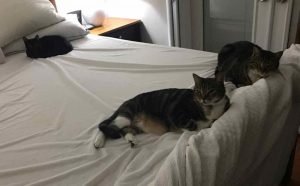 And, with that, good night, my friends. John and I will wind down the page over the next day or so.  It’s time for this most splendid hurricane house party to wind down. We’ll put together a list of best websites and Facebook pages for those who want to keep going. I’ll write the occasional aftermath column. I’ve got clients wondering if I am ever going to get back to building their websites. It’s been our pleasure.

Oh, and about the Cat 5s. Electricity was restored at our house at 4:15 this afternoon. The AC is on. The pool pump is running. Ed’s doing the laundry. And, the Cat 5s (three of them, anyway) are stretched on on the bed for the first time in a week. They hated the heat and preferred the cooler floor to a warm bed. It’s an awful picture, but, hey, we love our fur babies.

Linda Grist Cunningham is editor and proprietor of KeyWestWatch Media. She and her husband, Ed, live in Key West with the Cat 5s.