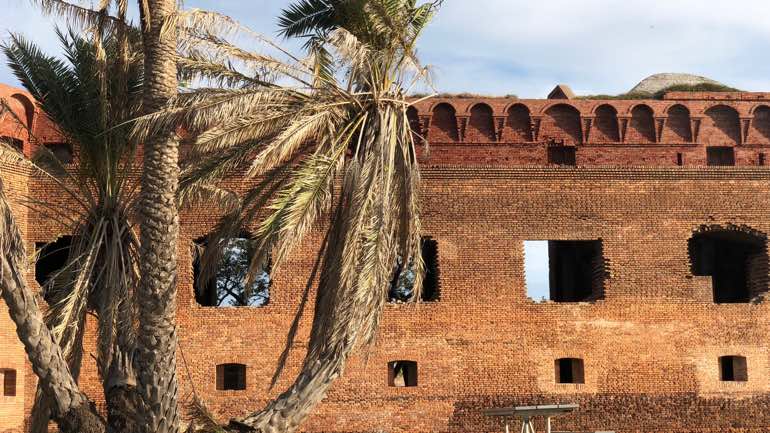 Camping at Fort Jefferson | 10 insider tips no one tells you

Right there on its own website, the National Park Service warns you: Camping at Fort Jefferson National Park in the Dry Tortugas is “primitive camping.”

I’m pretty sure no one takes that too seriously. These are the days of “glamping,” where camping comes in a huge recreational vehicle with a king-size bed and air conditioning or a tent the size of Texas and wifi. How primitive could it be?

Fort Jefferson is a pack-in-pack-out camp ground. Fewer than a dozen small sites cluster among the scrub trees just outside the entrance to the fort and a few steps from the Atlantic Ocean. What you need, you bring. What you bring, you take out. Food. Water. Gear. There’s no corner store, no takeout delivery — and most assuredly, no cell service or wifi.

And, yet. This is one of the most sought-after, most soul-soothing experiences on the planet.

Forty years ago, my husband, Ed and I camped on the then-desolate Outer Banks of North Carolina for our honeymoon. Over the following four decades, I traded camping gear for resort hotels and he added to his gear with Scout trips to Philmont and the Boundary Waters. When we moved to Key West in 2012, we brought all that gear with us. As our 40th anniversary approached we decided, what the heck, we’ll do one last celebratory hurrah with a camping trip to Fort Jefferson.

We figured we’d ditch the gear after the trip. That was before. We will return. Soon. Because despite the 20-30 mph winds for four days and three nights, despite a gale force storm with pounding rain that threatened to blow away our tent (and did destroy the neighbors’), camping alongside that massive fort, under the stars in the silence is magical.

The national park’s website has the details you’ll need, right down to a darn-near perfect packing checklist. No need to repeat them. But, there are a handful of observations and suggestions we’d offer to round out that checklist.

Linda Grist Cunningham is owner and editor of KeyWestWatch Media, which builds websites and manages social media for small businesses. She and her husband moved to Key West in 2012. Ed owns Tree Priorities and is a park ranger at Fort Zachary Taylor State Park in Key West.