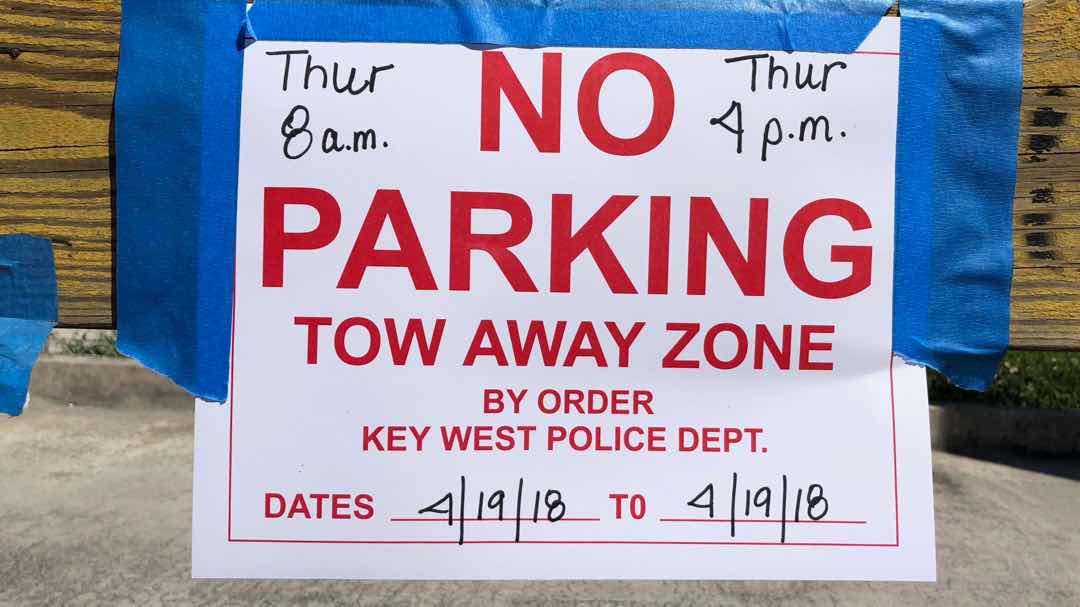 Trump in Key West | The show begins in 90 minutes

The no-parking signs are out, most everyone has moved their cars along the motorcade route and there’s a sense of “wait-and-see,” at least among the more politically aware folks on the island.

President Donald Trump is expected to land at the Naval Air Station field on Boca Chica at 11:45 a.m., today, then make the 7.5-mile trip to NAS Key West at the end of United Street for a meet-and-greet with Joint Interagency Task Force-South and a handful of local dignitaries, including Key West Mayor Craig Cates. The president is expected to depart before 2 p.m.

One must read the tea leaves — or conch shells as it were — to figure out what might be happening because there is paltry information from public sources, like the sheriff’s office, city and county government and Key West police. In fact, were it not for the so-called “coconut telegraph,” about all Key Westers would know is that we’re supposed to be patient with road closures and move our cars off the streets.

And, how do we know which streets? Not because there’s been an announcement. The city police are deliberately mum about the route,citing Secret Service security protocols. But there are enough barricades and no-parking signs out an about to make a decent guess that the motorcade is coming into town, hanging a left onto South Roosevelt past Smathers Beach, left onto Atlantic, right onto White at the White Street Pier and AIDS Memorial and another left on United, just past the new City Hall.

But…. That could be a red herring, designed to ensure protestors and supporters stay far away from the real thing. The president could well hop a helicopter ride on Marine One right to JIATF-S, or, heck, detour from the suspected route. One thing’s for sure, there’s only one road in and out of this tiny island and darn few straight shots into town and the NAS over near Fort Zachary Taylor State Park.

So, it’s 11 a.m., and I’m heading over to City Hall to see what’s happening there. Will update on Facebook as I can.

In the meantime, I leave you with this social media post from one of Key West’s young leaders. She makes herself proud, and I think she represents how most of us feel: “Clearly, i am no fan of 45. HOWEVER I have a stupid amount of respect and admiration for THE OFFICE OF THE PRESIDENCY – so that being said, I am still really excited to see the presidential motorcade go by and to get to see marine one in the sky. Just wish it was someone nicer on the inside!”