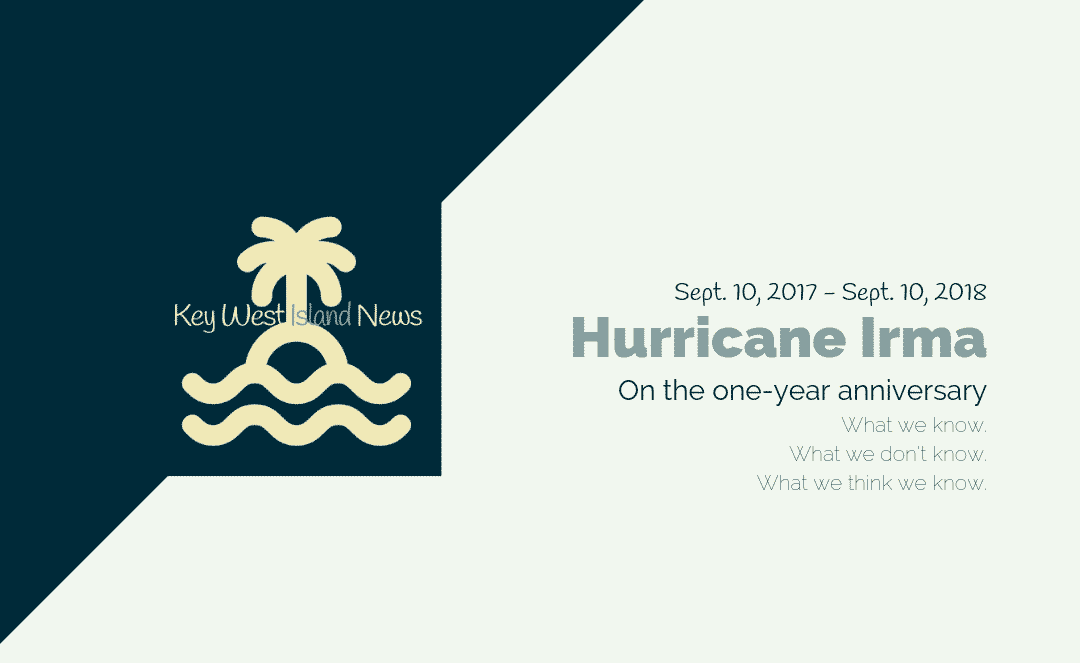 Hurricane Irma | How did news coverage get so confused?

By Sept, 5, 2017, five days before Hurricane Irma battered Key West and the Florida Keys, I was swearing — or at least muttering unpleasant comments under my breath. I was, as some will remember, visiting my mother in the Shenandoah Valley and ranting levels of swear words weren’t, well, appropriate.

Catching the brunt of my swear words were the national news media, the Key West and Monroe County government folks, and, unfortunately, the island news folks (except for Bill Becker, Ezra Marcus and others at US 1 Radio, which I’ll get to later). I wanted information.

They wanted to get the heck out of town.

Look folks, I’m a journalist. Forty plus years. It would no more occur to me to scurry for safety when there are stories to be told than would I toss my grandson off a cliff. As hard as I try to wrap my head around it, even a year later, I do not understand how communications and news and information flow got so bollixed up during the days before and weeks following Hurricane Irma.

The absence of trusted information sparked the Key West Hurricane Irma Facebook Page and several dozen columns and updates on my personal website. I figured if no one else would do it, what the heck, do it myself.

It worked. Gave me something to do instead of freaking out, which was an option most of the time. There were the times during the following three weeks that I used Google Translate to gather and share information with non-English speaking followers. I shared phone calls with scared-out-of-their-minds strangers who couldn’t locate family and friends. I wrote the 2 a.m., columns that had to be done even if in reporter’s autopilot mode. And, I shared hundreds of private messages with John Teets, who’d agreed to work alongside me.

So what did happen? Why were there so few reliable sources of information about Hurricane Irma’s dance with the Florida Keys? Why was so much of the information we did hear so terribly off-base?

As I’ve thought it through from the vantage of several months, there are three reasons information was both slow and flawed — when it existed at all.

1. No one knows where we are

Key West is this tiny dot at the end of an island chain floating between the Atlantic and the Gulf of Mexico. For sure, the national news journalists had no clue, so they conflated every island into Key West and promptly reconfigured our sprawling geography into something resembling downtown Atlanta.

Key West is 163.8 miles southwest of Miami. Tampa on the west coast is closer to Melbourne on the east coast (145 miles) than Key West is to Miami.

Even in monster hurricane language, our 163.8 miles is a long way. Folks forget (or don’t know) just how far out in the Atlantic Key West is. The island is also on higher ground (relatively speaking) than the middle and upper Keys and the southern tip of Florida, so what happens in Big Pine, or even next door in Stock Island, may look nothing like what’s happening in Key West.

That sad geographical ignorance underpinned long-distance reporting (no one was on scene by the time Irma was coming close) and that meant stories on television and in national newspapers were woefully inaccurate.

So we off-islanders were treated to headlines screaming that tens of thousands were being evacuated, that hundreds were feared dead, that Key West was destroyed, that the bridges were out. None of that was true. But when the national media got hold of the destruction in Big Pine, Cudjoe and the nearby islands, they conflated it all to a handy “Key West” dateline.

2. With one notable exception, the local news media decamped

Let’s start on an exceptionally high note: Bill Becker, Ezra Marcus and others at US 1 Radio stayed on the air 24-7 before, during and after the storm from their Sugarloaf Key studio, bringing to the island’s remaining residents the only news they could get about Hurricane Irma. For its work, the station received this year’s Murrow Award.

It was analogue technology at its best. Using a gasoline-powered generator, US 1 Radio was the lone voice for those whose battery-powered radios were working. Following the storm, hundreds of locals hunkered in their vehicles for a bit of cooled air and a big dose of Bill Becker’s news and information. Without the station, those who rode out the storm on-island would have known nothing for days. Their commitment demonstrated what strong, local journalism can be. Simply put, they did the right thing.

The Citizen, Key West’s local daily newspaper, left town before the storm and didn’t return for at least two weeks — and when they did publish again, the Editorial Board’s first editorial was an out-of-control diatribe about their perception that the city’s and county’s clean-up efforts were too slow. That still rankles folks.

I understand the importance of keeping staff safe, so The Citizen heeding the mandatory evacuation orders might be defensible. But, what makes their journalism failure so head-shaking is the failure to do anything. No social media. No news-coverage-from-off-island. Nothing. And, although some of their journalists did remain on-island, they were told to stand down. The Citizen could have done what John Teets and I did with Key West Hurricane Irma on Facebook and with our daily website columns. Certainly by the third day after the storm, they could have been back in business — online. Nothing. Didn’t understand it then; still don’t.

Gwen Filosa, the local reporter for the Miami Herald and Florida Keys News, managed to use social media to post news and information regularly despite the challenges of distance and technology. She has great sources, too, so when officials weren’t talking, she could ferret the information elsewhere.

The national media left before the storm and really didn’t return afterwards. Any reporting from the likes of the New York Times and CNN and Fox News was done with stock footage and an occasional call-in interview. The best after-storm news coverage came from the Miami Herald and the Fort Lauderdale Sun-Sentinel. They at least know where Key West is — and they understand that Cudjoe Key and Key Largo aren’t the same place.

As John and I gathered news and information from multiple sources, we relied consistently on social media-savvy folks who’d remained on-island or who were directly connected to on-island families and friends. The techy folks at NOAA and the National Weather Service-Key West were solid sources once they got their communications systems back on line.

Because my husband was on-island, he could send photos, videos and on-site information to me, which we turned around for Facebook and the website. There was scant information coming from the county or the city until late in the week, and even then it was sketchy — particularly in what was being released to the public. It was clear there were no well-thought-through communication plans that could weave together analogue and digital platforms — on- and off-island — for the broadest coverage.

Lesson learned: Analogue technology — landlines and radios — remain the go-to communications tools during a hurricane. I’ll get to paper and pencil shortly.

3. On-island folks were shut off and shut out

Communication on the island and between Key West and the rest of the world was chaotic. Non-existent. No government entity was prepared for the epic failures of the digital world. Satellite phones failed. Obviously, the cell and wifi networks collapsed. Landlines, the old-fashioned, hardwired lines, did work, but there was no significant pre-storm database of where those lines might be located throughout town. So accustomed to digital connections were officials that until emergency WIFI and cell access arrived, almost week after the storm, before they could communicate effectively

Those of us who were off-island during the storm knew more about what had happened than those on the island. I was able to reach a neighbor across the street just three hours after the storm passed on Sunday. He had a landline, so I knew from him that Key West was OK — and that our roof was attached. That meant my husband Ed, who stayed on the island, was safe even though I did not hear from him for four days. When I did and told him there was a boil water order in place, his response was classic: “Too late. Didn’t know. Been drinking it all week. Not dead yet.”

Folks in Key West shared the old-fashioned way. They walked around town — driving was all but impossible — and shared news with others. Which Publix had ice? Who had a landline? Can you get a message to someone? Who was serving food?

Farther up the Keys? Let’s keep it simple: They had no information except what they could pull from US 1 Radio.

The government agencies, including the City of Key West and Monroe County, appeared to consider those who stayed behind both superfluous and scorn-worthy. We told you to leave, seemed to be the attitude, so you deserve what you get. Nothing. We’re busy doing important things.

I’ve suggested to the Key West people who make decisions that taping a hand-written update memo to the doors of City Hall twice a day could have saved locals a lot of anxiety. Sort of like the really, really old days when locals would go down to the telegraph office and read the dispatches taped on the windows. What we know. What we don’t know. What we think we know.

And, the response? Until last week, pretty much crickets. I had an impromptu conversation with Key West City Manager Jim Scholl a few days ago, expressing both my frustrations and volunteering to help harness the integration of analogue and digital information sharing. In a nutshell, the city could just as easily have created and managed Key West Hurricane Irma’s Facebook Page, keeping off-island residents informed and using paper-and-pencil notifications and the radio for on-island folks.

As I told the city manager, challenging though it is when you have roads to clear, water and electric to restore and public safety to consider, when the city (and county) fail to actively release and manage the information flow, there’s a dark hole vacuum that gets filled quickly by rumors and screaming trolls.

So where to from here?

As sure as I am sitting here in my porch office, there’s going to be another hurricane. There have been significant post-storm policy changes put in place, from buying new satellite phones to hardening communication systems. I’m sure local news media are re-thinking their own what’s next plans. Hurricane Irma taught us well.

The catch? It could be another decade before that storm sets its course for Key West. If we haven’t regularly updated our plans or tested the satellite phones for the latest technology, we’ll be back in the same communications black hole. And, still without a pencil, paper and some Scotch tape.

Coming soon: In pictures and videos: Key West before and during Hurricane Irma — and where we are today.