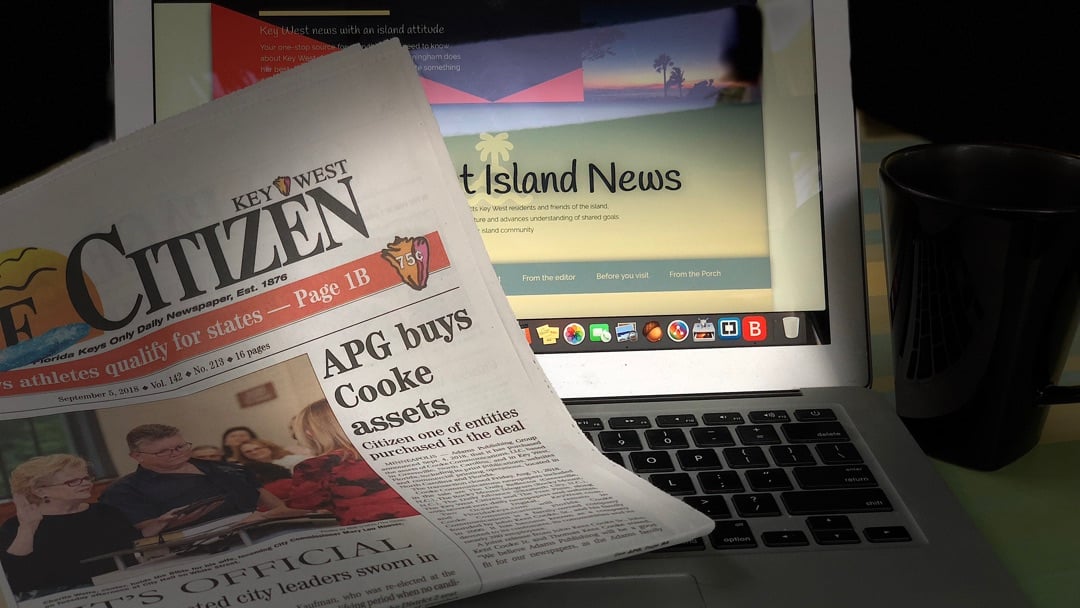 From the Porch | Sale of The Citizen, Ibis Bay for affordable homes, back to the gym, Woodward’s new book and about that Kavanaugh handshake

The Key West hurricane bubble held over the weekend, sending Tropical Storm Gordon spiraling north, east and then west of us. Some nasty rain and winds up the Keys, but no major damage as far as we know. And the weather in Key West was Labor Day picnic perfect. we’ll be watching the Atlantic off the African coast closely; that’s the hurricane nursery.

With that, let’s get to today’s updates and short takes: The Citizen sold. Ibis Bay resort for workforce homes? Did Judge Kavanaugh really snub the Parkland dad? And, journalist Bob Woodward is at it again. Can he take down another U.S. president?

Sale of The Citizen

The local newspaper, the Key West Citizen, was sold to Adams Publishing Group. If one must be sold in today’s newspaper climate, this may well bode good news for those of us who need and want local news. Adams Publishing company has a reputation of being among the few remaining “good guys” with no vulture capitalists in sight.

As a journalist who was bought-and-sold several times over 40 years, two things I can say without flinching: There will be changes, no matter what the press releases say; and, there are exponentially worse companies than Adams who could have bought the Citizen.

Adams is a tightly held, family company out of Minneapolis. They started buying up small newspapers in micro-markets (very tiny, and in the scheme of things, Key West is a tiny market) in 2014. With a net worth estimated at more than a billion dollars, the family can afford to invest in quality local journalism. So here’s to hoping they’ll do three things: improve the print newspaper content; invest in and make digital a priority; and understand the community.

Here’s an excellent piece on Adams from the Poynter Institute in St. Petersburg.

Speaking of The Citizen, the amazing Mandy Bolen Miles stirred up local news junkies this weekend with a most excellent suggestion: The City of Key West should purchase the Ibis Bay resort and morph it into workforce housing.

Even allowing for a host of “nattering nabobs of negativism” — to purloin a phrase — there are legs on this one and the “deciders” — to purloin again — ought get on this now.

With just these words, she’s spurred an excited conversation that, really, the city’s deciders should pay attention to: “The city should buy Ibis Bay Resort and turn it into housing for middle-income, full-time working residents. You know, the people we always talk about helping with housing initiatives.”

You can read her column here (heads up: You’ll need a Facebook account, or login to your Citizen online account. I recommend Facebook; way easier to get to than through the Citizen’s clunky user interface.)

I’m no fan, but I gotta tell you, I watched several videos from different angles and I’m thinking no, Judge Brett Kavanaugh didn’t snub Parkland dad, Fred Guttenberg, at the conclusion of Tuesday’s confirmation hearings. But the interwebbies and television talking heads are all abuzz with conspiracy theories — on all sides, by the way.

Guttenberg’s daughter was killed in the Parkland school shooting. It’s no surprise he was at the hearings and doing his level best to make contact with the Supreme Court nominee. But, folks, I’m just not comfortable with the headlines that say Kavanaugh deliberately snubbed him.

Kavanaugh didn’t appear to extend-and-then-remove his hand for a shake as many are reporting. There were crowds around, there was lots of ambient noise and equally chaotic leave-the-meeting hustle and bustle. I’ve been in those settings. Instead of assuming Kavanaugh was deliberately rude or, worse, making a political statement, let’s go with “sometimes a camera shot or a specific video angle doesn’t capture contextual reality.”

Bob Woodward on the march — again

About the last person I’d want digging into my life would be journalist Bob Woodward. Not only did he and partner reporter Carl Bernstein do the Watergate reporting that brought down President Richard Nixon, but he’s spent a career of building sources, developing expertise and keeping his reputation as an investigative reporter strong.

Like what he’s accomplished or not, you can’t deny that a Woodward byline on a story makes you sit up and take notice. Something big is about to drop,

And it did over the weekend. “Fear,” Woodward’s book on the Donald Trump presidency, officially went into pre-sales yesterday with a publication date of Sept. 11. The book is already a best seller. (Disclosure: I ordered for my Kindle yesterday.) But we already know enough of what’s in the book to make an educated prediction that the current occupant of the White House isn’t going to be in the best of moods. His comments to Woodward that Woodward has always been fair to Trump aren’t going to be among the presidential tweets this week.

Oh, and about all those post-publication, post-interview denials. I’m a bit cynical, but here goes: That was likely part of the deal between Woodward and all those folks. You talk openly and honestly with me, and then feel free to do post-pub denials as a way to save face.

They said those things, folks. Woodward didn’t make ’em up.

OK. That’s it From the Porch this morning. Off to the gym.