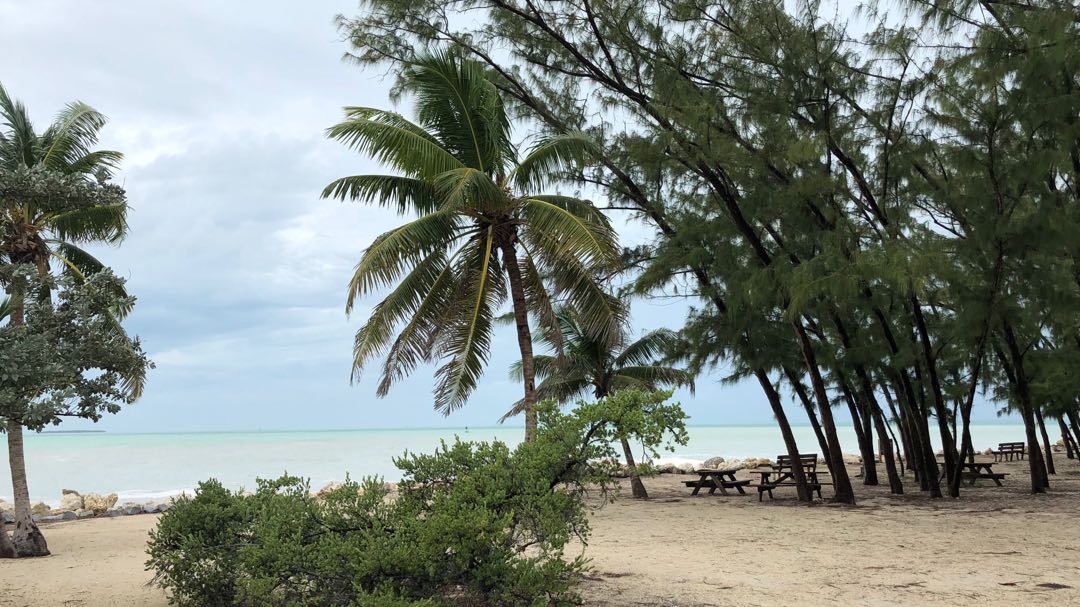 Looks like another day to drag out the wellies and rain gear. Or hole up with a book because you’re sure not going to be snorkeling, sunset sailing or basking on the beach.

As Hurricane Michael churns his way northward through the Gulf of Mexico, sights set on the Florida panhandle, he’s throwing waves, winds and blowing rain at Key West. Sort of a “hey, you’re safe on this one but not completely out of reach” attitude. We’ll take it.

Ran into a couple friends at new Publix (we still call it that although new is a relative term) yesterday afternoon during one of nastier deluges — rain blowing sideways — and with sheepish downward glances this was the consensus: I gotta admit, I am sure glad Michael is going somewhere else.

It’s been a year and a few weeks since Hurricane Irma did her thing on Key West and the Florida Keys. We’d like to think we’re all over it and normal has returned. Not really. Too many remain without roofs fixed, debris sorted and homes repaired. Too many are without a real place to call home. Too many are struggling to make ends meet with jobs that don’t cover the rent. Oh, we look and sound our usual Key West laid back, but underneath is a whole lot of depression, worry, stress and disconnect.

So, yeah, we’re OK with watching Michael pass to our west.

Woke to the awful news that a another bicyclist lost his life when when he collided with a truck this morning on North Roosevelt near the Mattress Firm store. That’s the second bike-versus-truck death in a week. And, there are countless too-close-to-call incidents around the island every day.

People who drive vehicles don’t like people who ride bikes. I know that sounds like hyperbole, but even bike-riders-who-also-drive-cars seem to get downright aggressive when there’s a bike in “their” lane. We are a tiny island with precious little roadway to share. Locals in a hurry to get to work. Tourists lost and wandering trying to find a place to park and clueless about one-way streets and which way is where.

I ride a trike and I hold my breath each time a car or truck passes, some appearing to cut it as close to me as they can just for sport. Or following closely enough to bump me out of the way. Sometimes it’s a tourist in a fancy red rented convertible. Sometimes it’s a local bent on making the light first (you know it’s local by the residential stickers or license plate.) They have one thing in common: They either don’t see or pretend not to see a bike right beside them.

Bikers do stupid things, too. Poke around admiring the sights and weaving dangerously across the lane. Run red lights and stop signs. Zip around stopped traffic to cut the corner. Ride the wrong way on a one-way street, Fly down the sidewalk. (Sidewalk riding is legal, but for heaven sake, it’s not a speedway.) And the tourists? Oh, dear bike god in the sky. Way too many haven’t been on a bike since they were six. Re-learning in Key West is not the best idea they ever had.

But bikes are always going to lose to vehicles. In Key West where bikes are the only transportation many of us have, there’s got to be a better way to share the road with vehicles.

My youngest brother, Robert, works with Samaritans Purse. He’s in North Carolina this week as part of the post-Hurricane Florence cleanup. He shared this with his family this morning. Thought it might resonate with others who know that doing good, helping others, making a difference in the world and in another’s life starts with a simple thing: Just show up.

Her name was Wanita

Stopped for lunch at Hardee’s .

Truck pulls up with a lady driving. Distraught, crying, asking if we could help her. She had come down here from Knoxville Tenn to work after the hurricane. Came with her boyfriend but he had left her and she was alone and wanted to get back to her family in Tennessee.
She asked if we could help. Gave her all the paperwork listing the usual resources. Also gave her Samaritans Purse phone number. Told her to call that number and they could direct her with help. I then prayed with her for help and safety.
As I was going to back of truck. She asked if we had anything cold to drink. Gave her a cold drink, which she reacted so graciously to. She then said her boyfriend wanted to go do drugs and she did not want to go. He then left and she was alone and wanted to return to Tennessee.
She needed gas. The tank was showing empty. Since we were right beside a gas station, I said if she would pull over, I would fill her tank.
It filled her heart, she cried and said she was without hope. She saw the BGEA signs on the truck and our blue shirts with chaplain written on it and that’s why she stopped. We were her only hope. We filled her heart, we were at the right place and at the right time.
God will continue to see her on her way. We will continue to just show up.