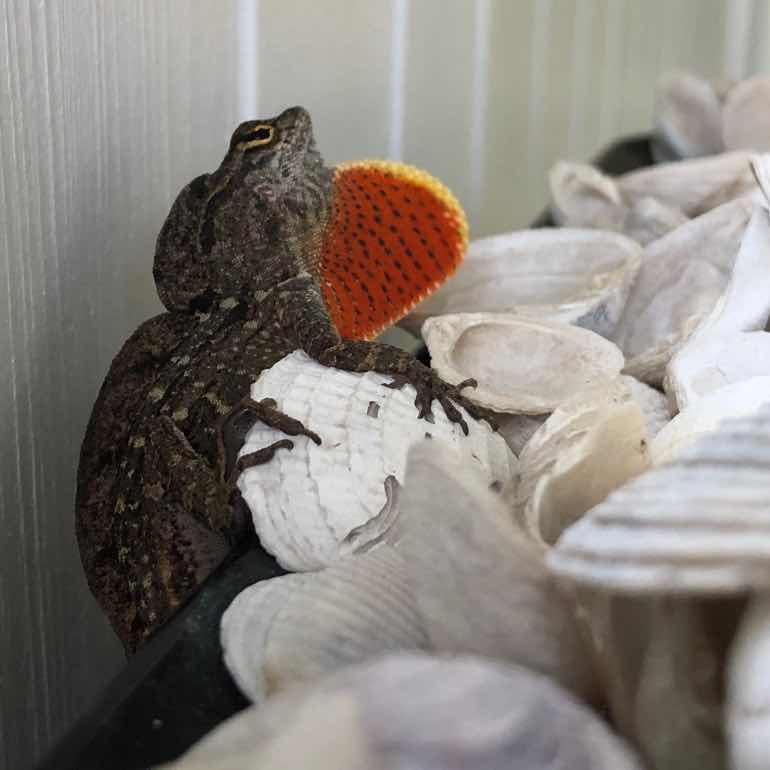 Living on an island | Meet the creepy-crawlies of Key West

When one lives on a tropical island, one should expect two things that don’t happen much on the mainland: People will visit when you casually invite them, so beware; and BUGS AND LIZARDS share your bed (along with the cats.)

The visitor thing is for another day (read more here if you’re so inclined.) Let’s get back to the creepy-crawlies.

I made my peace with the creepy-crawlies at 2 a.m., Jan. 1, 2013, when I got out of bed to change Connor’s diaper and warm his bottle. Grandson Connor was six weeks or so old and he and I were happily communing in the wee hours of his first Key West visit. Always the practical one, especially in our island-sized spaces, I put a wiggling, wide-awake Connor on the kitchen counter for the drat changing — a skill set one doesn’t forget; like riding a bike.

We were chatting away and wiping that tiny behind when I noticed a platter-sized palmetto bug, wings spread, sitting maybe 13 inches from my grandson’s head. (Well, it looked platter-sized. Probably more like a couple inches, but at two in the morning, things get mythical.)  PS: Palmetto bug is a fancy (albeit inaccurate) name for the standard American cockroach, which down here can be 2-inches or more and scare the bejesus out of you when it flies in your face.)

Anyway, back to the story. That roach wasn’t going anywhere; saying shoe-shoe was idiotic; screaming, which was my first thought, would have scared the kid, the cats, the hyper-alert parents and the grandfather. So, deep breath, and another, and I went back to chatting up Connor while we finished the diaper and grabbed the bottle.

That roach sat through the whole thing, antennae waving, wings poised for flight and me praying he’d stay put until I could snatch the kid to safety. Said bug eventually slipped back behind the oven, rejoining his extended cadre of family and friends. I pretended I hadn’t seen it in the first place.

Island creepy-crawlies are the ubiquitous underbelly of living in a sub-tropical paradise. The Florida Keys tourist development folks don’t spend bazillions of dollars on beautiful photographs and advertising with the BUGS AND LIZARDS OF KEY WEST as the featured species. If there are animals in those ads, they’re some cute cat or chicken. Maybe an occasional dog. Certainly not a flying roach the size of kitchenware.

I classify the island creepy-crawlies as BUGS AND LIZARDS.

The BUGS include my four faves:

Let’s be uncommonly clear here: You can’t do a darn thing about the BUGS so stop whining. They’re part of an island ecosystem; they don’t eat much, they’re not going to hurt you and you don’t need to call the landlord, property manager, hotel concierge et al, just because you saw one or a dozen. The bugs live here. They love a tropical island as much as you do. They are not automatically a sign that your house, hotel or vacation rental is dirty.

Many of us have a monthly bug spray service that keeps BUGS somewhat at bay, but the real secret is not leaving food on the counters. This ain’t the mainland. Put that stuff in zipped containers, in the refrigerator. Do not, repeat do not, leave tonight’s birthday cake on the table. The ants will carry it off.

Now for classification two: the LIZARDS.

Lizards come in two sizes: the adorable, pint-size aneoles and geckos; and, the butt-ugly, nasty iguanas.

The darling little lizards are everywhere, including your bathroom sink while you’re brushing your teeth, the closet with your favorite tutus, the kitchen counter while you’re prepping dinner, and poolside next to your adult beverage. Just go about your business and they will, too.

Little lizards can also be found at the center of a cat circle. Cats love to catch and torture lizards. I’ll spare you details; use your imagination if you’re inclined. (Or, come visit Casa Cunningham. The Cat 5s will appreciate the opportunity to show off their well-honed techniques.)

Generally, people and little lizards live casually, if not happily, side-by-side. Not so with the large lizard, that nasty iguana. Iguanas are not native to the Keys and Key West. They are invasive, poop in your pools and on your decks; carry salmonella; and have no natural predator except the human and the vehicle.

I’m not going on an iguana rant here, but, really, if you’re among those who want them as pets, who think  they are so cute, I invite you to tour the golf course and Mount Trashmore out on Stock Island — or my backyard this morning — for a full-on iguana lesson. You do not want one of these hanging in your palm tree and pooping on your tutu when you go out the gate.

Live with them, the BUGS AND LIZARDS, we do. The longer you live here, the easier the truce between you and the BUGS AND LIZARDS OF KEY WEST. Still, I don’t hang my feet over the edge of the bed in the middle of the night without wondering if the floor is clear of creepy-crawlies, but neither do I anymore call for assistance on bug and lizard clean-up duty. Just get a tissue, pick it up and flush it down the john.

PS: Do not crush cockroaches; tends to spread the eggs if that ugly sucker is a girl.