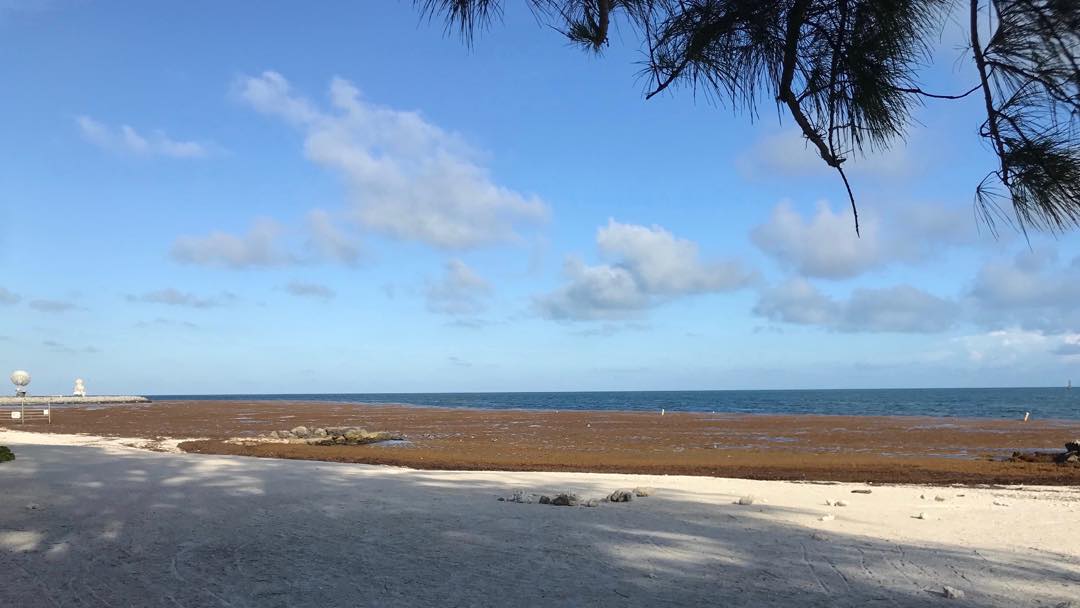 OMG, does Key West really stink all the time? Or, everything you need to know about sargassum

I can see them in the rear view mirror as they wrinkle their noses. Those guests of mine who arrive at the airport for summer visits. I know what they’re thinking: Doesn’t Key West have a sewer system? Smells like they’re dumping, ahem, crap in the ocean.

We’re not. But they can be forgiven for thinking so. The whole island smells like sewage gone ripe. As sure as my northern mainland friends know it’s Fall when the maples turn red, I walk out my front door in the mornings, sniff that sulfuric, rotten-egg breeze and know Key West summer is here. And, we live a mile from the beach.

No, that’s not our toilet leavings, I tell guests. Give it a couple minutes and you won’t notice. Seriously. It’s called olfactory fatigue; the body and brain know they don’t want the over stimulation so they adapt quickly. Wine tasters doing a bunch of nose-in-glass sniffing get the same thing. No nose.

That ubiquitous smell is decaying sargassum, islands of floating, brown sea algae that is piling up along the beaches of Key West, the Florida peninsula, Mexico and other Caribbean islands. Happens every summer when the winds and currents come from the south. Used to be the sargassum and the smell went away when the winds shifted.

This summer we’ve gone from smell to stench. And, big scare alert ahead: It’s not going to get better, because this sargassum is coming from Brazil and it IS, in part, the result of faulty sewer systems. This is not the Sargasso Sea variety with which we are familiar. Since 2011, the sargassum piling up on Caribbean beaches has come from a massive algae bloom off Brazil’s east coast.

Sargassum researchers, says a recent story in the New Republic, do appear confident in two things, though. The first is that these algal blooms constitute a new type of natural disaster—one that, like hurricanes, can be expected every single year. The second is that this new risk is not entirely natural. Humans have made these blooms far more likely.

Before we go to the science lesson, here are five things to know about sargassum when it behaves itself:

OK, time for a science lesson:

FLORIDA ET AL: The brown algae form a seaweed that usually bunches up into huge mats. These mats provide shelter, food, breeding grounds and nurseries for a variety of marine life from fish to sea turtles and birds, according to the PBS Nature Now blog. The seaweed is usually found in the Sargasso Sea in the North Atlantic.

About seven years ago, however, a huge patch was discovered far to the south off the coast of Brazil. From there, the sargassum flows into the Caribbean Sea, depositing tons of seaweed on island beaches, then up into the Gulf of Mexico, where it can foul beaches in Mexico and Florida. The blooms can get then caught in the Gulf Stream and make it as far north as New England.

“It’s been pretty interesting. There doesn’t seem to be any knowledge of these inundations happening historically. There’s no real record of them. So sargassum has been washing ashore periodically — 2011, then again in 2014, 2015 and now again this year (2018) (Editor’s note: 2018 was bad; 2019 is predicted equally so) — we’re getting big inundations of sargassum. That means feet-high of sargassum washing ashore in the Caribbean,” Amy Siuda, an assistant professor of marine science at Eckerd College in St. Petersburg, Florida, told WMNF.

Siuda said there could be a number of causes for these blooms, including more nutrients on the ocean surface, global warming, or atmospheric dust from Africa.

MONITORING BY UNIVERSITY OF SOUTH FLORIDA: The University of South Florida does a good job monitoring the sargassum float. Here’s what they’re seeing now: “… the month of May 2019 showed a total Sargassum coverage of 896 km2 as compared with a historical mean of 78 km2 between 2011 and 2017, for the area bounded by 8-23°N and 89-58°W. The bloom extent in 2019 is significantly higher than most of the years during 2011-2018 for the Caribbean and the central West Atlantic. The reasons behind this record-high bloom, however, are yet to be determined.”

Monroe County puts a slightly more positive spin on the incoming sargassum (and they may be off on the origin of this year’s stuff), but they give a nod to the damage these massive floating islands are causing:

MONROE COUNTY: In the Florida Keys, when we experience prevailing winds from the south and southeast, these massive floating mats of sargassum that have broken free from the Sargasso Sea’s circling gyre are washed onto shore with the wind and waves. Tons and tons! Unfortunately, the dead and decaying sargassum can remove oxygen from the water and lead to fish kills, smother sea grasses and turtle nests, and can become packed so thick inside the residential canals it can become difficult to get your boat out.

Historically, washed-up sargassum is one of the ways beaches were created in the Florida Keys, as the accumulation of seaweed along the shoreline helps to keep the sand from eroding and provides nutrients to help en­rich the soil. But when the sargassum encounters a seawall or a canal instead of the beach there is little benefit for it decays, sinks, and stinks! Unfortunately, this is a major cause for fish kills because the decomposition of organic matter literally removes the oxygen from the water.

So. What to do? Scientists are stumped at the moment. It will take millions of dollars and years of research to find solutions. Fishing and water sports folks are dodging and weaving around it as best they can. Tourist development folks and real estate folks are tending to downplay the mess.

As for me? I’m heartsick at another potential environmental disaster for our ocean waters, the reef and our island. In the short run, I watch the wind gauge, hoping for a shift that will re-direct the sargassum and the stench out to sea.

PS: If for some curious reason you WANT to smell the decaying sargassum again, sniff a handful of coffee beans. It clears the nose palette, so to speak.