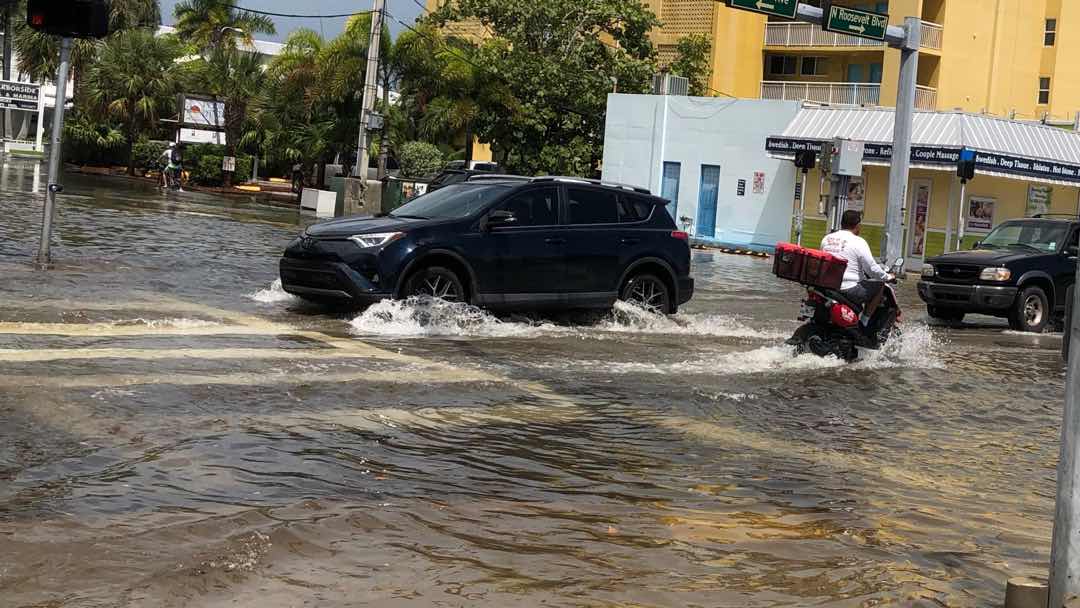 What do you get when you combine rain, high tide, a super new moon and sea level rise? (Slider above shows flooding at the intersection of Eisenhower and Truman Friday, Sept. 27, 2019.)

Nothing like living on an island in the middle of nowhere to teach me a few science lessons. Like what happened today as rain storms pushed across the island all morning leaving behind more than two inches of rain at the same time as tides were running high — and a “Super New Moon” tugged tides higher, spilling sea water into streets, parks and buildings. Combine those things with sea level rise and, well, it wasn’t fun to be out and about this morning and afternoon.

Long timers are wont to say that we’ve always had these King Tides or “sunny day” flooding. We have. At least for as long as there has been a moon. What makes flooding like today’s so striking is the frequency. It’s not unusual to find standing salt water at low-lying intersections for weeks on end. We’ve paved over and developed virtually every open space on the island leaving the water nowhere to go except into over-taxed storm drains where it backs up and overflows into the streets and yards. Ocean water, at high tide and with sea level rise, tops the sea walls and floods into main thoroughfares like the intersection of Eisenhower Drive/Jose Marti Way and Truman.

I’ve lived five blocks from that intersection for 10 years. I’ve seen the water come over the seawall occasionally. I’ve driven or biked through standing water at the side-street intersections frequently. But, I’ve never known there to be a need for a no-wake zone. (Except in hurricanes and we’re not talking about that right now.)

Shortly after lunch, I walked over to Bayview Park at the intersection of Eisenhower and Truman. Traffic was backed up westward to White Street as vehicles slowly made their ways through the sometimes knee deep water. Scooters and bicycles turned around or walked through as best they could. But, if you needed to leave the island today, this was one of only three ways out — and the other two also had flooding. This was definitely salt water; I know because I walked through it and then gave it a little taste. (I know, I know, but I figured if you wanted to argue that it was rain water, I could say “nope.”) The egrets were happy.

There are reasons — scientific, environmental and political — why escalating sunny day flooding in Key West ought give us pause. No one thinks this is a one-time thing. Few believe it’s no worse than it ever was. And, none of us want to admit there may come a time when living on this island will be less tropical paradise and more Water World. Maybe not in my lifetime. But in my grandson’s. He’s probably not going to be thrilled that he gets the Key West house in the will.