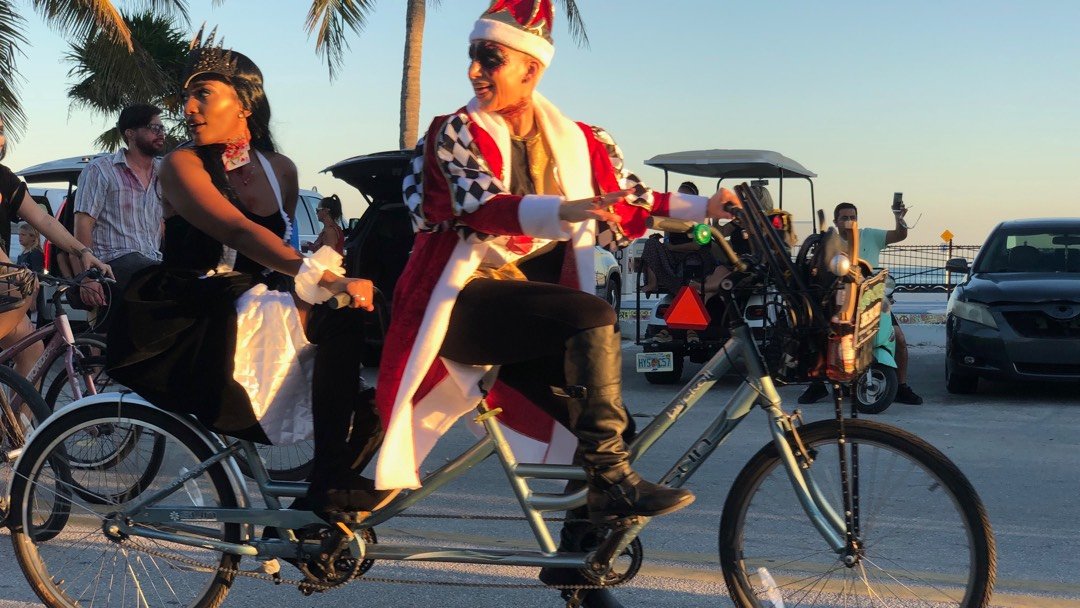 Fantasy Fest 2019 is a bit like an aging, 55-year-old Gen Xer getting her groove on by pretending to be, well, 30-something again. Back in 1979, Baby boomers, the ancient parents of today’s sagging Xers and scared to death they and their businesses would disintegrate during the long, slow months between hurricane season and January, created Fantasy Fest as a Halloween to end all Halloweens — and to get the tourists back in town with super-sized wallets and generous tips.

Four Key West locals, Frank Romano, Joe Liszka, Tony Falcone and Bill Conkle, created the two-day party and parade. It worked. For 40 years, hundreds of thousands of folks believing in Halloween, the Key West mystique and what-goes-on-in-Key-West-stays-etc., descend on the island for the last two weeks of October for 10 days that culminate in a spectacular parade featuring the King, Queen and Court of Fantasy Fest.

Most who come spend money, fill up restaurants and beds and generally forget that despite their aging years, boobs and private parts — even with gloppy paint and a smear of glitter — ought not be spreading across a bench alongside the Truman Waterfront Park. I really hate having to bring a pack of Handi Wipes when out and about between Oct. 17 and Oct. 27. But, ewwww, I mean who wants to sit where a stranger’s naked be-hind has been?

It’s easy for locals to hate on Fantasy Fest. Hordes of off-islanders swarm across the island’s tourist district, too many of them day trippers with coolers and camp chairs and not a dime to spend. Equal hordes of those who fancy themselves “swingers” go in search of lewd, weird and things you generally don’t want to explain to your grand kids or employers. Thank heaven today’s event producer, Nadene Grossman Orr, has corralled the worst of the stuff into something they’re calling the Little Black Book. Look it up. Everyone else can get info and schedules at the official Fantasy Fest website. (OK, so PS: You can find the black book skeds there, too.)

What started as a locals parade and some partying morphed into 50,000-75,000 off-islanders pouring into Key West, bent on having an outrageous time — and a few years ago things got just too darn raunchy and the local hullabaloo forced enough changes to ensure Fantasy Fest was more festival and less fantasy of the weird. Key West may well be “Where the Weird Go Pro,” but most of us keep most of our clothes on when we go to Publix. At least the tutu covers appropriate parts.

Yeah, it’s easy to hate on Fantasy Fest. The fact is, those boomers in 1979 were right. This is, hands down, the slowest time of the year. While I love that I don’t need a reservation and locals get discounts, no business large or not-so, can survive on October cash flow. So, on Oct. 17, Key West kicks off Fantasy Fest 2019, 40 years of being “In Tune, But Off Key.”

If you’re coming down this year — or next — or if you’re a local wondering if you should brave the hordes again to see if things have gotten any better, here are 10 tips for creating your own Fantasy Fest dance card: