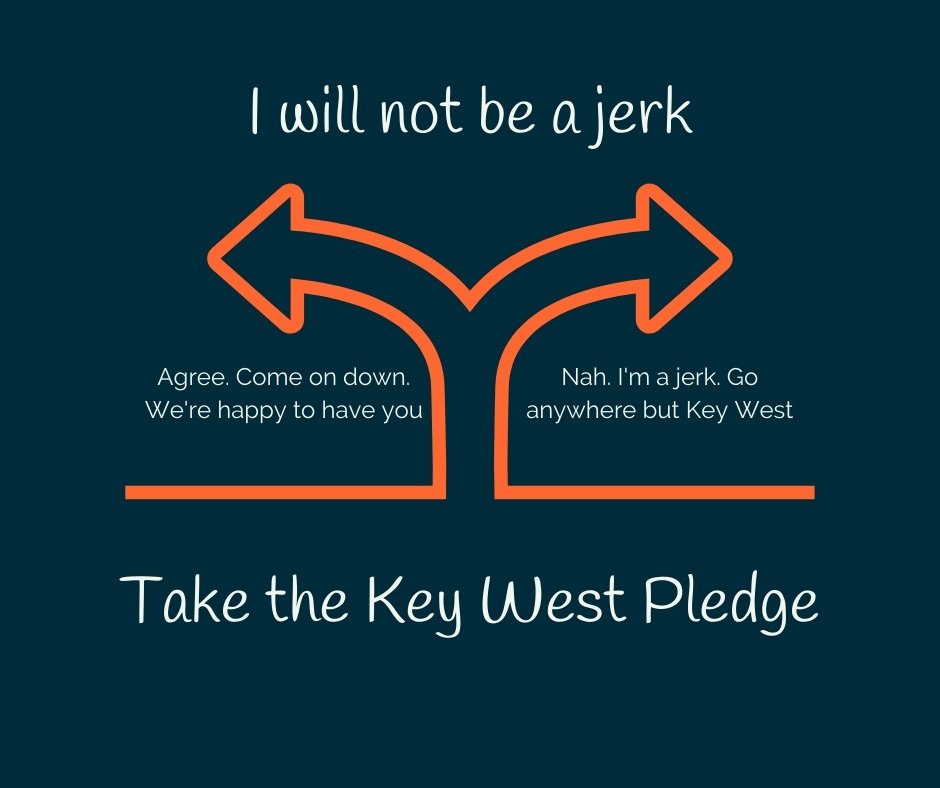 I’m pretty sure the worldwide dispensing of polite behavior began the day I walked out out my parent’s house without makeup. Somewhere in the late 1960s or early ’70s. There might even have been a refusal to wear white gloves to church, although I wasn’t rude enough to sport hair curlers in public.

We baby boomers were raised with a bunch of rules. There was an etiquette class in my fifth grade where we learned — boys and girls — how to set a table, hold a conversation, send a thank you note, shake hands firmly with eye contact. OK, and, yeah, some of us had to “take cotillion,” which taught us to waltz and caused sweaty hands.

As we headed into adulthood, boomers chafed at the rules and bent and broke them at will. We spurned the rules, but we could call upon them as needed. Now that we are creaking around in our older years, we’re baffled that anyone needs to sign a pledge to do the — clearly — right things.

Here cometh the dear-heaven-there-are-too-many-visitors-stop-them-before-they-kill-us pledges. Countries and cities with over-trafficked tourist destinations are crafting pledges of responsibility for visitors. These places, like Key West, are desperate to minimize the environmental disasters created by too many people with no commonsense in too small a space.

In my mood this morning, I just want to shout: What were you thinking, you clueless dope, as you casually ran a stop sign, crashed into a car and had the nerve to explain you didn’t think the stop sign applied to you? Have you no commonsense?

Well, no. We don’t. We boomers raised the Xers who raised up the Millennials without teaching, much less enforcing, some basic rules. Hence we must have pledges of all varietals, which no one may read, much less heed, but without which polite society doesn’t stand a chance.

(Sidebar: Sort of like Moses, the wandering Israelites and the 10 commandments. I guess polite society has always needed pledges. End passing thought. Back to the tourist pledges.)

According to an excellent roundup in the Washington Post, “Many of the pledges include common themes: treat the destination respectfully, don’t leave trash behind, stay on marked paths and sleep at official campsites. Safety over social media is another constant. (“I won’t risk life or limb [human or sapling] for more likes,” reads Bend’s pledge.) And some are extremely specific to their destinations. Hawaii’s Pono Pledge notes: “Molten lava will mesmerize me, but I will not disrupt its flow.’ ”

Seriously? We have to tell people not to do stupid things that would kill them when they take a selfie? Or not step into an active lava flow? Yeah. We do.

It’s easy for me to scoff at pledges like these and I’ll admit to rolling my eyes when I read the story. But it got me thinking. If Key West were to create its own pledge for visitors, what might we say?

I, (fill in name here), do hereby pledge to the following during my visit to Key West.