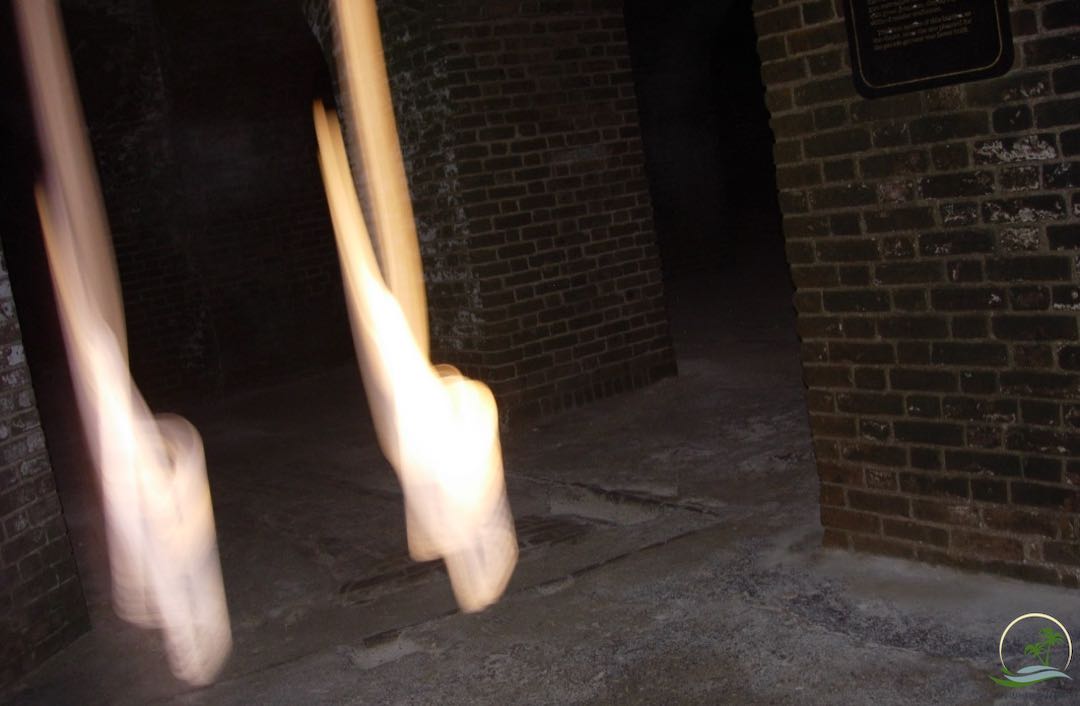 The Fort Jefferson ghost(s) | Finally, there’s a picture to prove that fort is haunted

I have ghosts in my life. There’s little Daisy Williams of Sweet Briar College circa 1974 and Pansy Grist, my grandmother, about 10 years later. There’s the Key West one in the corner of my bedroom closet, a benign haint that makes the Cat 5s crazy, but pays no attention to people. My husband, a park ranger at Fort Zach, is no stranger to the ghosts in the fort, especially around the infirmary. We camp at Fort Jefferson. We’ve felt the “energy” inside the fort. So, yeah, I do ghosts.

But when a friend on Oct. 17, emailed me a picture from Fort Jefferson in the Dry Tortugas asking “what do you think this is,” I hesitated before I eventually texted back: Ghosts.

With a period, not a question mark.

Finally something other than casual conversation and Brad Meltzer’s 2015 novel, “The President’s Shadow,” to prove there are ghosts at Fort Jefferson. Straight away, I went to the inter-web. Google “ghosts at Fort Jefferson” and the pickings are pretty thin. Mostly people expect there to be ghosts at the Civil War fort that once was home to Dr. Samuel Mudd, the doc who patched up John Wilkes Booth after he murdered President Abraham Lincoln. About 30 people died of yellow fever out there in that then-forsaken place so, sure, ghost believers assume there are ghosts there. But, unlike Key West ghosts famous in superb detail, there’s slim pickings on Fort Jefferson ghosts.

First-hand sightings are, well, embarrassing. No one, including my friend who volunteers at the fort, wants to sound like a crackpot. It was reassuring that a veteran Fort Jeff park ranger didn’t think she was nuts. When she told him of her experience and showed him the photo, his response was not what she expected:

These experiences are odd (to say the least) but not unheard of. Yes, that one is very interesting. There are a lot of accounts regarding the ‘energy’ in that specific bastion, so it’s not completely surprising.

David Sloan, considered Key West’s fluent ghost buster and tour guide for Haunted Key West Tours, has at least five books devoted to Key West’s haints, including legendary Robert the Doll, who resides at East Martello Tower. We asked David to take a look at the Fort Jeff photo. He’s not saying no.

“There are so many stories from the fort. Pretty cool stuff. There are so many variables with cameras and conditions today that it is impossible to verify a photo as paranormal, but for me, I think it is interesting that there are slight differences in the two light streams. There is a theory that ghosts start as an orb, then swirl to grab heat energy and become a spiraling vortex. This causes the cold spots, when they take this heat. The next phase after a vortex is a full apparition. This could be a vortex. Notice the spinning motion. If it was moving rapidly, that could explain why it appears twice. Of course, it could be a camera glitch. But with the stories I’ve heard from the fort, nothing would surprise me.

Now, back to that picture. Here’s the note my friend sent with it:

Soooo, was downloading Fort Jeff pics from my little Nikon this morning and found this one. Taken early evening inside the fort. There were no shafts of light or other sources of illumination in the area. There was no wind stirring up dust. Nothing to see other than the Ft walls. It was dark inside, as you can see from the background.  I just held my camera up and clicked without focusing on anything specific to see how it would function in the dark. None of the other pics taken with the camera around the same time and with the same settings show these images. No apparent malfunction on any of other Nikon pics taken throughout the week either.

When  I saw the interesting images I sent the pic to a friend who is professional photographer to see if he could tell me what happened. His take:

“In the days of film cameras, I would say ‘light leak.’
“But I don’t know the interior mechanicals of your Nikon.
“Very odd – like static electricity on the sensors.

“Mystery to me.
“You should try to duplicate it.
“Take the camera outside to bright sunlight, turn it over and around so light strikes all sides of it.
“Then go inside to your darkest room (closet) and shoot a random image.

“Try it several times.
“Other than a light leak, I have no idea.”

I did what he suggested but could not duplicate. A little side note (and I swear I am NOT making this up):  I recall just after I took the shot I suddenly felt uneasy for no apparent reason. Didn’t want to be there any longer, so immediately exited to the parade ground outside to finish my walk home. All felt fine as soon as I got outside. This is all very odd…