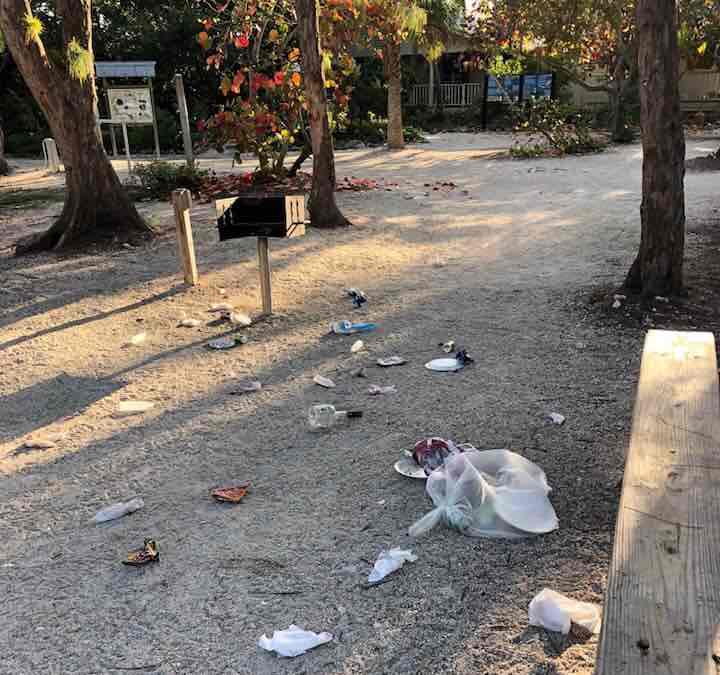 Fort Zach visitors: What part of “take out the trash” do you not understand?

There’s a reason there are no trash cans at Fort Zachary Taylor State Park. You’re supposed to take your trash with you when you leave.

Fort Zach, as are most state and federal parks, is “pack-in-pack-out.” Big signs tell you that as you enter the parks. Bring it in with you; take it out with you. To be fair, most visitors are darn good about packing out the empty red Solo cups, bottles, paper plates, dirty diapers and other detritus of a day at the beach.

But, Mary, Joseph and the Wee Donkey, there are some pigs among us, though, come to think of it, that’s righteously unfair to pigs. Pigs don’t leave the crap for someone else to pick up.

I overheard a couple of Fort Zach visitors wondering aloud the other day about the absence of trash cans. They were hauling their own bags out and had passed a pile of trash leaning against a guard rail. “Maybe if the park had garbage cans,” said one, “people wouldn’t leave all that junk just sitting there.”

Seemed logical to me. Add convenient trash cans and folks would use them instead of dumping on the beach. Except that, apparently, it works the other way. Add trash cans and the piles, well, pile up. Since the state and national parks aren’t staffed for trash removal, the rangers count on good citizens to pack out their leftovers. And, as I said, most of the time it works fine, which is why the beach and paths at Fort Zach look so good.

Sure, if you’re a visitor staying at a hotel, it’s inconvenient to schlep that bag of trash back to your room. But, reminder here: You were perfectly capable of gathering up all the stuff you took in with you, right down to the picnic fixings. Seems logical you can pack it out. And, your hotel does have trash cans. Big ones.

Please don’t leave your trash on the beach. The photo above was taken by a Fort Zach park ranger on March 3, 2019. Looks like some igits left a bundled bag of trash for the seaside fauna to scatter. Nice mess, huh? Surely, said igits could have taken that bag with them. I am shocked at the people who drop their picnic leavings – with no trash bag; simply scattered across the sand. Do they think there’s a magic trash fairy who makes those chicken bones, plastic plates and half-empty bottles and nasty napkins vanish overnight.

I’ve never understood the person who can toss a fast-food bag out the window. Or crush a cigarette out on the sidewalk and leave it there. Never understood getting up from a picnic table and leaving things to blow away — including those environment-killing balloons and assorted other plastic single-use things. I look at the stuff left behind by the casually oblivious and wonder if their mothers actually did follow after them picking up. (And, then, swearing under my breath, I take it home to my garbage can.)

More likely it’s an entitled arrogance that assumes someone is getting paid to take out the trash; that their taxes and $6.50-per-carload entrance fee entitle them to personal slob-prevention service. After all, they must rationalize, they did the hard work and put the stuff in a plastic bag to make it easy for the trash picker-uppers.

Same entitled attitude as the dog owners who waltz their leash-less dogs across the beach and into the water. Fort Zach loves your canine friends — on a leash, never on the beach. But that’s another day’s story.

Happy Saturday, my friends. Enjoy this beautiful weekend. And if you’re headed to Fort Zach, red Solo cups in tow, how about picking up a few extra pieces of trash along the way. Tread lightly on this planet. Leave the earth a little better than when you arrived.