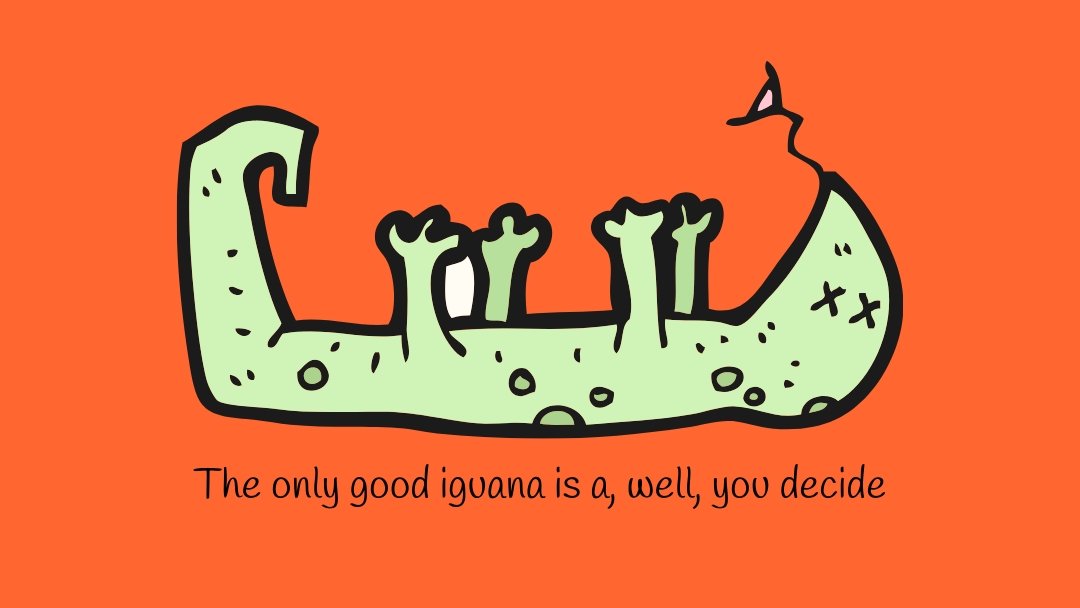 I am not sharing my Key West bathroom with an iguana

Fair warning: Not for the iguana lovers.

If you get all muggly-snuggly over your resident iguanas, go read something else. Right now. Because …

Smashed. Dead. I am not sharing my Key West bathroom with an iguana.

Challenging enough to share it with the Cat 5s, a husband and the brown anoles with no shame about lizarding across my kitchen counters. The line is drawn this side of three-feet-minus-the-tail iguanas.

Iguanas are as ubiquitous in Key West as free-range chickens and six-toed cats. They begin as “oh, how cute; let’s take him home for the kids to play with” and end with “dear heavens, what have we done; let’s let him go outside.”

The problem with outside is iguanas love outside. They love the flowers, bushes, trees and each other. They make babies, leave lots of, well, former flowers, bushes and trees, and their only predators are cars, humans and certain chichi restaurants. (Note: Just because a restaurant is named Iguana doesn’t mean it serves iguana. I checked.) Iguanas bite, scratch and take baths in your pool. They wander the Overseas Highway and race around the backyard fence.

Left alone, they’re not dangerous. Or not dangerous as in rabid fox. Or fire-breathing dragon. But they’re big, nasty, dirty, environment-wrecking pests on a tiny city island. A bite or scrape by their spines can introduce one to a salmonella weekend. They’ve created underground bunkers and tunnels in the Key West Cemetery requiring grave restoration to keep loved ones from falling through.

Key West’s invasive, non-native iguanas are a cross-pollination between stowaways from South American fruit ships and other ports afar and stupid pet owners. They’re not a protected species, at least not around here. No social gathering ends before there’s at least one good iguana tale told and solution offered.

Indeed, a recent Saturday afternoon of wine tasting provided this: Iguanas are like mangoes. They start out bright green and you know they’re ripe when they turn orange. (For the uninitiated, mature male iguanas often turn brilliantly orange as mating season approaches. The older and the more dominant they think they are, the longer they stay that color.)

Puerto Rico has more iguanas than people and wants to export them for meat. Costa Rica doesn’t have enough and wants more. There are save-the-iguana folks and just as many who want them gone. Lots of folks say they trap and relocate them. I suspect relocate mostly means the neighbor’s yard three blocks away or the great lizard round up.

Ours iguana tale begins as do all tall tales. Once upon a time said iguana suns himself on the pool deck. Said husband (see above) comes up behind it and sorta says “boo.”

That scares the scales off the iguana and he crashes through the closed screen door, into the house and into the bathroom — thankfully, it has a door. Five cats (also see above) cower under the daybed.

Iguanas are like cats; they don’t do well on leashes or with directions. We tried “shoo, shoo,” and the iguana ran around the tiled shower. No time to call the local “get rid of pests humanely” people. No way to get him gone except the last resort and not the relocation one. Trap. Smash. Trash can. Sad.

So, asked several friends, what would you have done if husband hadn’t been there? Besides crying in the corner and cowering with the cats, I ask. Well, the iguana wouldn’t have made it to the bathroom because I wouldn’t have said “boo” and started the whole scared scales thing. Boys apparently will be boys even when they’re five decades past.

I’m cool with an iguana policy of live and let live. Outside.

Sigh. Let friends of iguanas write hate mail. I told you not to read this.