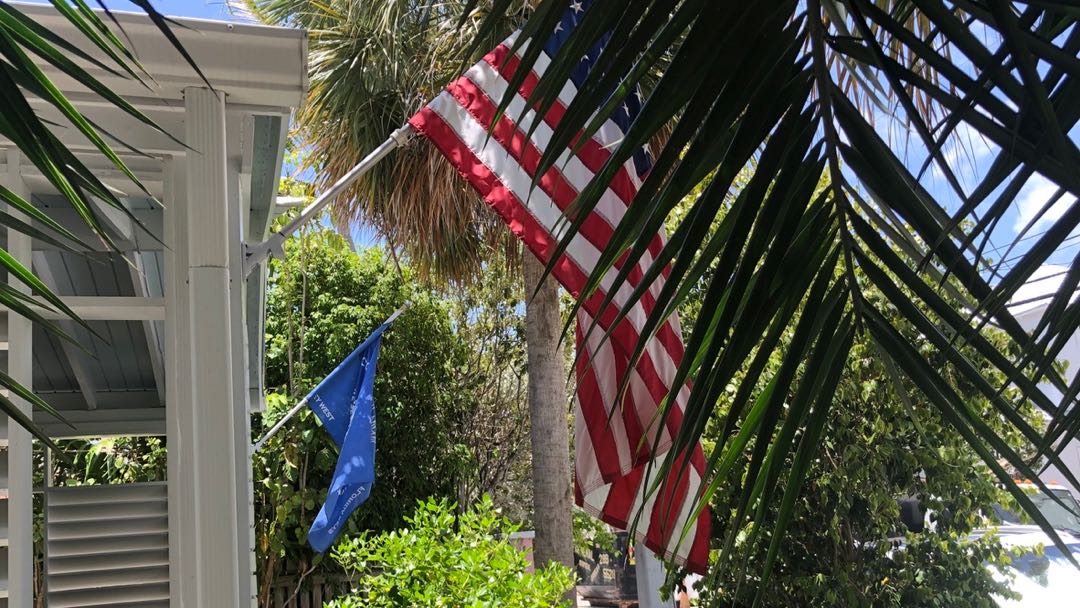 Two flags fly on my front porch. The one of red, white and blue. The second the Pride flag or the Conch Republic flag.

But a recent conversation caught me up short when a friend casually declined to wear her favorite red, white and blue colors because “I don’t want to be confused with a Trump supporter.”

We have come to that. The colors that so clearly define at a glance that one is American have been co-opted — again — by divisive, chain-yanking politics so that even our common respect for the American flag fails.

These days the folks wearing red, white and blue and carrying an American flag don’t look much like me and we likely don’t share political and world views. It begs the question: Can mask-wearing, left-leaning, country-loving Americans still wave the flag?

This sad turn of things has been a long-time coming, and, though it is perhaps more obvious in these days of social media and cell phone cameras, the red-white-and-blues against the “others” is certainly nothing new. That flag is an extraordinarily powerful symbol. From rockets’ red glare to the Civil War through Iwo Jima and the civil rights era, the American flag has been clarion call to good and evil, a ready tool to separate the us-and-them, a way to proclaim our loyalties, real and perceived.

I’ve used the flag to provoke. In 2005, when the U.S. Congress was considering a flag-burning ban, I wrote a column promising to burn a flag in front of the News Tower if Congress passed the bill. They didn’t pass it; I didn’t burn it. But a Google search can still turn up a plethora of visceral anger, including the usual nut cases with death threats. And, I know that some tourists on the Conch Train, which passed my house for years, wondered at the juxtaposition of the American flag with the LGBTQ Pride flag, as though one couldn’t be an American-in-quotes and be a rainbow girl, too.

On July 4, 1776, the Second Continental Congress formally adopted the Declaration of Independence, though it wasn’t until well after the War of 1812 that Americans celebrated the holiday in earnest. On June 28, 1870, Congress made the holiday official. The Library of Congress has wonderful online content for those who want more history.

Two things are ubiquitous in Fourth of July celebrations: an American flag and a bonanza of red-white-and-blue napkins, beer coozies, bathing suits, jewelry, ball caps and whipped cream, strawberry and blueberry parfaits. It is a quintessentially American holiday that, except for the unskilled who blow up their fingers, usually brought out the best in us. A mid-summer holiday that Americans have celebrated with parades, fireworks and family cookouts for generations. (Well, until 2020, that is. What with the coronavirus pandemic, this year’s celebrations will be somewhat less parades-fireworks-and-beaches and more backyard.)

I can see the American flag on my porch when I wash the dishes at the kitchen sink. And, I wonder if my friend is right, that by flying that flag, that by wearing a red, white and blue ball cap, we tell the world our politics, not our country? Actually, I know she’s right. We mask-wearing, left-leaning, country-loving Americans have allowed the co-opting of those colors and the flag. We too often fail to carry the flag when we protest injustice, when we take a stand for equality, liberty and civil rights. We carry our signs. We leave the flag at home, if we even give it a passing thought.

We need to shift that paradigm. The American flag with all its complicated, dysfunctional and provocative symbolism belongs to every American. To let it and its colors become solely the property of the political right is contradictory to what this holiday represents: We “… mutually pledge to each other our Lives, our Fortunes and our sacred Honor.”

Wear the colors. Bring your flags — and, yes, when needed, wave them high while setting them afire. Hundreds of thousands have died for that right. It’s the American flag. All Americans.