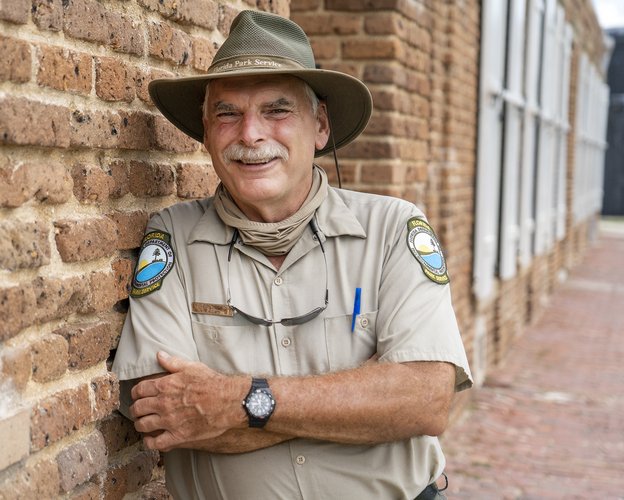 
Ed Cunningham has many familiar faces in Key West.

He’s Ranger Ed at Fort Zachary Taylor State Park, where he loves to take visitors on tours of the fort and keep an eye on beachgoers. If you are having a beer on the sand, as this reporter may or may not have done once, he is also the guy who nicely but firmly tells you that alcohol and glass containers are not allowed.

He’s also board president at the Key West Tropical Forest & Botanical Garden, where he is sometimes referred to as Mr. Chainsaw because he was out in the garden after Hurricane Irma decimated the 15-acre historic rare ecosystem, helping clear away the damage. 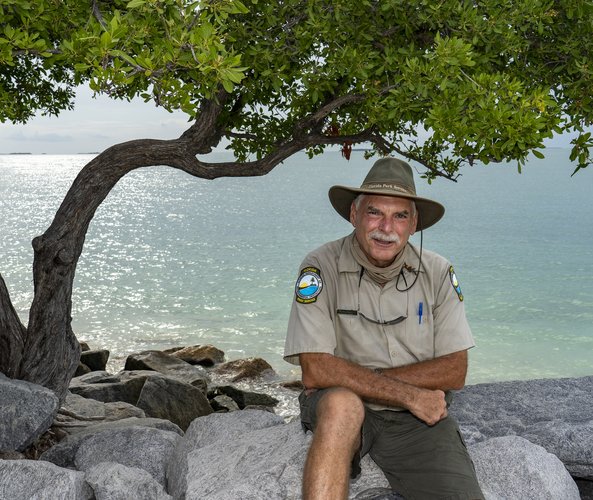 ROB O’NEAL/The Citizen
‘Ranger’ Ed Cunningham takes a break under a seaside buttonwood Saturday at Fort Zachary State Park where he has worked for the past four years.

And he is the newest member of the Key West Tree Commission, where he hopes his 40 years as a forester will help quell frequent complaints against the board that it is either too permissive or too strict in allowing trees to be removed from private property.

“It’s always controversial,” Cunningham said about the Tree Commission. “People are very divided on trees. They love them or ‘it’s my tree. I can do what I want.’ But there’s a compromise in the middle. That’s what I hope to bring to the board. I’ve dealt with tree issues my entire life.”

Indeed, he has. Cunningham began his career with the U.S. Forestry Service and his resume is filled with terms like “vegetation manager,” “substation bare-ground program” and “cyclic distribution line clearance.” What those mean is that Cunningham was a certified utility arborist specialist working for electric utility companies in New Jersey, Chicago and Wisconsin, helping keep electric lines clear of trees, bushes and other vegetation that could take down a power line. He tried to retire once in 2012, moving with his wife of 43 years, Linda Grist Cunningham, a veteran journalist who writes a column for The Key West Citizen, to live in Key West full-time. But he was talked into continuing to work remotely, living in his dream town while flying out of Key West almost every week to travel to a job. That lasted until 2016.

“I didn’t move to Key West to not be here. So, I applied to work as a park ranger. It had everything I wanted: working with trees, working with people, giving tours of the fort, sea turtles,” he said, adding, “They didn’t tell you about cleaning the toilets but you do that, too.”

Cunningham works three days a week as a ranger, leaving time for his other interests, which include helping out at his church, volunteering at the Tropical Forest and carpentry. He also works as a tree consultant at his local company, Tree Priorities. At Fort Zach, he says he is probably the longest-lasting part-time person at the state park and he has no plans to leave.

“Generally, everybody is happy to be there. I like to talk to people and share the beauty of the park,” he said.

COVID-19 has made his job a little trickier. A mask is now part of his ranger uniform and visitors “sort of” comply with social distancing. Rangers make sure visitors are following the rules around the Café snack bar but out on the beach, people are encouraged to take responsibility for themselves.

“It can get interesting out there. Most people abide by the rules. We encourage people but we really don’t enforce the mask rule. It’s not our job,” he said.

Same for unobtrusive alcohol consumption in the park.

“It comes down to being responsible and respecting other people and not being a jerk,” he said. “A couple having a glass of wine at sunset, I don’t bother them.”

COVID-19 has impacted his work at the Key West Tropical Forest, as well. The garden was closed for two months this spring and while visitors are welcome again, the organization’s learning program, which had included speakers and classes on local plants and trees, has had to adapt. Cunningham heads up the speaker series, a monthly program between December and May. He plans to offer virtual speakers and the programs will be recorded and available for streaming from the Tropical Forest website. This summer’s program for kids was also put online, as well as the garden’s board meetings.

“We’ve actually increased our audience,” Cunningham said about the move to online programs. “I guess that’s one good thing from COVID, that we learned how to do things remotely.

“One of these days we’ll be back live and in person.”

Live is also what the Tropical Forest board is hoping to be able to do for its 85th anniversary in February. A gala celebration with a 1930s theme, the decade when the garden was first opened, dinner and costumes are planned.

“We’re planning it to be live. We’re hoping people can actually meet and have a great time. We’re keeping our fingers and toes crossed” the virus has subsided enough to allow the event, he said.

In the meantime, the Cunninghams continue to have a perfect balance between work, volunteer projects and just hanging out. They love to snorkel and sail, even going as far as taking sailing classes so they can be a competent crew on friends’ boats. And he continues to absorb his surroundings.

“It’s been a learning curve, being from the Northeast and the Midwest. I’m still learning trees down here and plants. It’s amazing, the tropical foliage, and I’m learning fish, too,” he said, laughing.

“The question always comes up, where do we go on vacation? We’ve never been able to answer that. So, we never go anywhere.