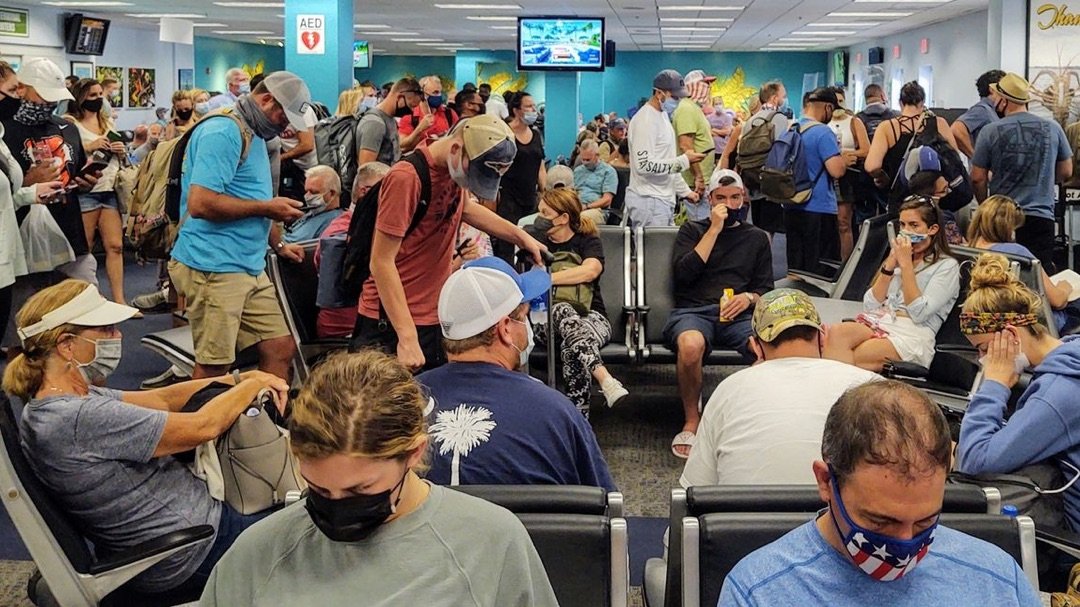 Our cramped and quirky Key West airport is at risk of becoming the island’s next Covid-19 petri dish.

Airlines are ramping up flights. Visitors weary of their hometown restrictions and already seeing snow are booking vacations. Locals who haven’t left the island since March are holding their collective breath and flying out for business, recreation and family. Almost a million passengers made their ways through Key West International Airport in 2019 and we were on track for another record in 2020. (Compare that with 2017 when the passenger number was 392,381.) Even with the wrench Covid-19 tossed into the spring and early summer of 2020, the airport remained busy as off-island visitors look for an escape from up-there-somewhere.

In the Before Covid-19 days, EYW’s departure gates were akin to sardines in cans. Throw in a thunderstorm in Atlanta, an ice storm in Charlotte or a scheduling glitch in Miami and you’d be lucky to find a place to stand without touching a stranger’s sunburn. Same true for the lines at check-in. Got TSA PreChek? You’re still gonna stand in that line. About the only way to avoid the mob scene was to grab the Delta 7 a.m.-ish flight.

But, really, who cared back then? One was often in vacation bliss. The quaint, quirky airport was part of the mystique. Smart locals knew the best place to wait out a flight departure was the outdoor smoking “beach.” Even non-smokers could get some fresh air and a bit of quiet space. We could manage.

Covid-19 turned our airport topsy-turvy. When a thousand passengers give or take a few arrive at EYW at the same place at the same time, there’s not a snowball’s chance on the smoking beach there’s going to be anything akin to social distancing. No one is enforcing masks; crew, staff and passengers are jammed into the departure gates, baggage claim, security lines and check-in. My kids left the island on Delta on Oct. 11; they said the airport was jammed. A couple of pictures from a friend the same day showed out-of-control the crowds at American’s gate.

And, well, what do you expect? The Crankiness Index soars. Right now the index is at about the level of three siblings in the back seat whining “She touched me. Make her stop looking at me.” Come February if EYW and the airlines don’t get it together, the Crankiness Index could make national headlines. We really don’t want to see “Key West passengers brawl inside departure gate over social distancing. Many injured. Flights canceled.”

Getting it together will take some doing. Figuring out who controls what at the airport is not for the faint of heart. Forgive me if I miss a line or two on the flowchart, but here’s a start: The airport itself sits on land inside the City of Key West; that’s the end of city control of the airport. Monroe County operates the airport and its executive director reports to the county commissioners. Most airport staffers are local residents who work for the Transportation Safety Administration. The airlines set their own rules, regulations and schedules according to rules set by the mother of all bosses, the Federal Aviation Administration.

The FAA is somewhat fainthearted about its Covid-19 safety protocols. The FAA wants airlines running at full capacity, so its protocols are suggestions. If you think for one second the FAA is going to shut down or limit EYW flights, I want whatever you’re smoking. The county and the city have no authority to tell airlines how to schedule. The airlines serving EYW — with the exception at the moment of Delta — are packing their planes and consolidating flight schedules to max out profitability. The airlines are in deep-red financial territory; they’re not going to cut back willingly. So while Delta maintains socially distanced flights and manages their schedules in and out of EYW, American is having none of that. No encouragement from the EYW airport director is likely to make a difference.

So, what CAN the city and the county do? They can control some of the spaces inside and around the terminal. The airport director and the TSA are finding additional space to hold passengers before boarding. Given our weather that could be outside. The TSA wasn’t enthusiastic about one idea of using the upstairs in the check-in area before security and calling flights through security in order. In November, additional space opens as construction is completed on the new bathrooms and waiting area.

All of that will help though it’s unlikely to keep the Crankiness Index from soaring. In the meantime, if I fly off-island, it will be on the early Delta with an N95 under my 801Girls-Sushi Key West mask.