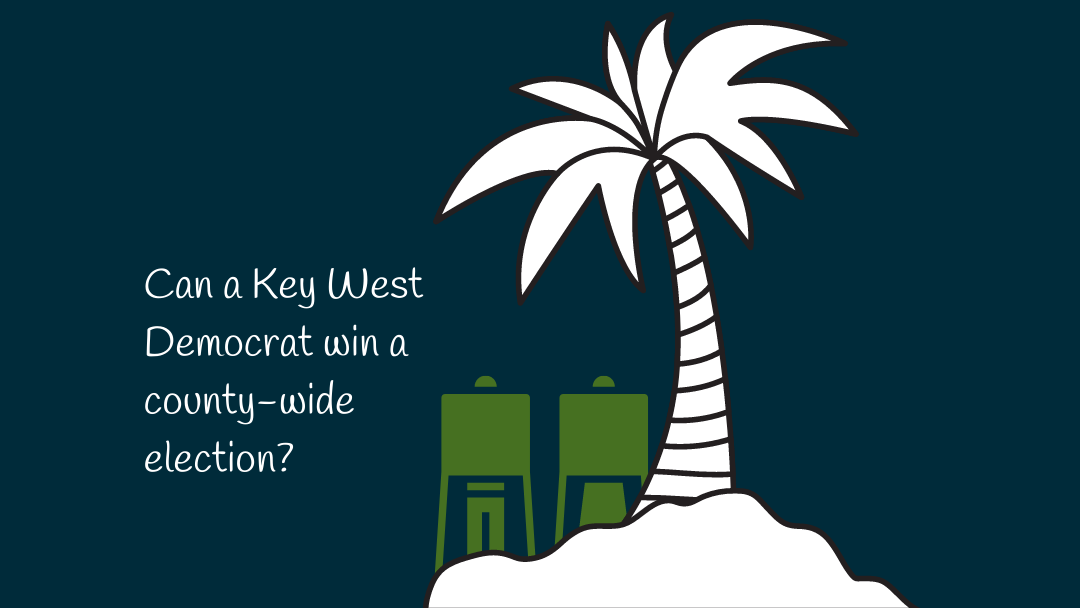 Were the erstwhile Conch Republic again to “secede” from the U.S. mainland, it’s going to need to paint red and blue stripes on the Cow Key Bridge: blue on the Key West side, red for everything Stock Island and eastward. Once one crosses onto Stock Island, the rest of the Keys have little in political common with Key West. Perhaps there might be a slight jog in the map to include the folks living near the Key West Tropical Forest & Botanical Garden. They might feel more Key Westerly than the rest of Stock Island.

Common political wisdom — and I use that term loosely — would counsel that a left-leaning Democrat could find political soulmates on the island of Key West proper. But venturing elsewhere? Or even assuming that Key West is a blue bubble in a sea of red? Best be careful assuming too much. If the results of last week’s election show nothing else, they demonstrate that Key West is a blue-shifting-purple bubble. The island’s voters lean Democrat but not by landslide proportions. And definitely not by enough to offset the red tidal wave that begins on Stock Island and darkens deeper as it moves up the 100-mile-plus island chain.

Key West has long sung siren notes to those who opt out of Mainland baggage — though none of that ever made us a bunch of liberals despite what some of our voting patterns might indicate. Whether real or simply anecdotal, the island’s mystique holds sway on our imaginations. We are an island of “you do you; I’ll do me.” It’s a culture born of our historic isolation and our bent for making do. We honed those skills during the American Civil War when we were Southern sympathizers under Union military rule.  We held our noses while the Union built gun emplacements and ran the port and we lived by  the Union rules. We were irritable and unhappy among friends, but busily figured out how to make money off the Yankee sailors and get along in public.

In 1982, our “go along to get along” world became our mock secession from the United States and a declaration of independence as the Conch Republic. By October 2000, when then-Mayor Jimmy Weekly proclaimed us “One Human Family,” our libertarian (very little “L”) culture was cemented. We tended to vote liberally on social and environmental issues, all the while keeping a wary eye on anything we saw as public encroachment on our rights as individuals to do what we wanted as long as we weren’t jerks about it — and sometimes when we were.

About a third of the county’s population lives in Key West and the island no longer dominates the political stage in Monroe County. The historical population numbers prove the point: In 1950, the census reported 21,792 residents of Key West and 8,165 in the rest of the county. Today about 50,000 live outside the city; about 24,000 live in Key West. Key West is finding itself lost in a sea of voters who do not share the island’s One Human Family culture and that has repercussions.

Key West maintained its blue voting patterns in 2020, though only one polling location with its 82 percent Biden vote rose well out of the 60-ish-40-ish split between Democratic and Republican voters in Key West. Over all, Monroe County favored Trump over Biden by 53.39 percent to 45.45 percent. The changing demographics of Monroe County, particularly up the Keys, mean Key West itself is rapidly losing its representation on countywide issues.

No two races demonstrate this better than the vote tallies in District 1 and District 3 of the Monroe County Board of County Commissioners. County commissioners must live in their respective districts and are technically elected to represent the districts in which they actually live. But all county voters cast ballots for all commissioners. That means a voter in Key Largo has as much say in who represents Key West as does a Key West voter. It also means that Democratic candidates for offices in Monroe County are likely to never again win a countywide race.

CORRECTION: This column was updated on 12-14-2021 to correct a factual error. The original column should have stated and now does that candidate and current Monroe County Commissioner Craig Cates received more votes at District 1 precincts than challenger Annalise Mannix.