How discombobulated has 2020 been? Just look at your phone pix

Good thing I’m a happy girl. Because as sure as Christmas is coming, what I did this week would send normal people screeching for mood-altering pharmaceuticals.

It started innocuously enough. I changed the screensaver on my laptop to randomly display the photos from my phone. Most made me smile, but there were way too many that evoked “who the heck is that” or, worse still, were those accidental screen shots of things about which one seriously has no clue. I’m pretty good about deleting useless pixels and there were only 5,000 or so pictures stretching back decades.

So, I figured, I’ve got a few spare minutes; let me dig in there and clear out the detritus. Sort of like cleaning out the closet so the only T-shirts left are ones without holes and stains. Four hours of screen time later, a thousand photos disappeared into cyberspace. There are probably another 500 that I ought to shake loose someday; but this was a darn fine start.

It made me miserable.

Year after year, the photo feed was filled with friends, family, house guests and a never-ending stream of what I call “out-and-abouts.” There were family reunions every year; another couple of visits with my brothers annually and one with my sister in Des Moines. There were half a dozen back-and-forths each year between Key West and Atlanta to spend time with son, daughter-in-law and grandson. There were weekly wine tastings and afternoons at Fort Zach. There were Christmas parades, locals parades, Fantasy Fest (but never the nightmare crowds of New Year’s Eve). There were zombies and lighted bicycles. There were parties and happy hours on my porch with randomly curated guest lists. Maskless and crowded selfies with happy folks in the background.

I suspect your photo feed is much the same. Wonderful reminders of our busy, people-centered life stream. 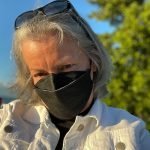 Then I crashed smack into 2020 and Covid-19 as they tossed about our longed for dreams, our best laid plans, like pick-up sticks.  Mary, Joseph and the Wee Donkey. The first ten weeks of the photo feed looks like the previous two decades. Filled with such as the annual FIRM fund raiser Mardi Gras style; the League of Women Voter’s membership meeting; Saturday wine tastings at The Roost. Joan’s Valentine’s Day brunch. Lunches with friends. Potlucks after church in the courtyard. Happy hours at Truman Waterfront Park. The Park City ski trip that ended March 11, less than a week before Key West began to shut down. An Equality Florida meeting on the last Friday. The calendar was full until it wasn’t and life simply vanished.

The first virtual happy hour showed up on March 28. It was kinda fun in that “something novel” fashion. We snapped pictures and posted them with cute cutlines. No one takes photos of Zoom things anymore. There’s little about those Hollywood squares we want to save. See what I meant earlier about running screeching for pharmaceuticals?

So. What IS in my 2020 photo steam? Cats. Lots of cats. Because in addition to our own Cat 5s, we’ve fostered the babies from the SPCA, a task of heart-tugging joy. There is an abundance of food photos because I’ve been cooking. Who could resist a taste of last month’s Queen of All Puddings or the mango cornbread pudding made from our 2020 banner harvest. There are dozens of landscapes and close-ups of grains of sand. There’s a price tag from the hardware store for one of the litany of home improvement projects. There are 28 pictures of my grandson’s visit in October between Covid-19 spikes and coupled with quarantines on both sides. There are no house guests. But, there are sunset happy hours with my pod-of-two at Truman Waterfront Park. Six feet apart and masked we are, but we are there and you can tell we are smiling because our eyes are crinkled.

I’m thinking I might not want to return to a photo feed so busy, a calendar so jammed that I cannot stop to take a portrait of a grain of sand. For as my photo feed followed my calendar, this 2020 riptide caught my life and taught me to swim parallel to the shore and with the current. Godspeed, my friends. We will be OK.