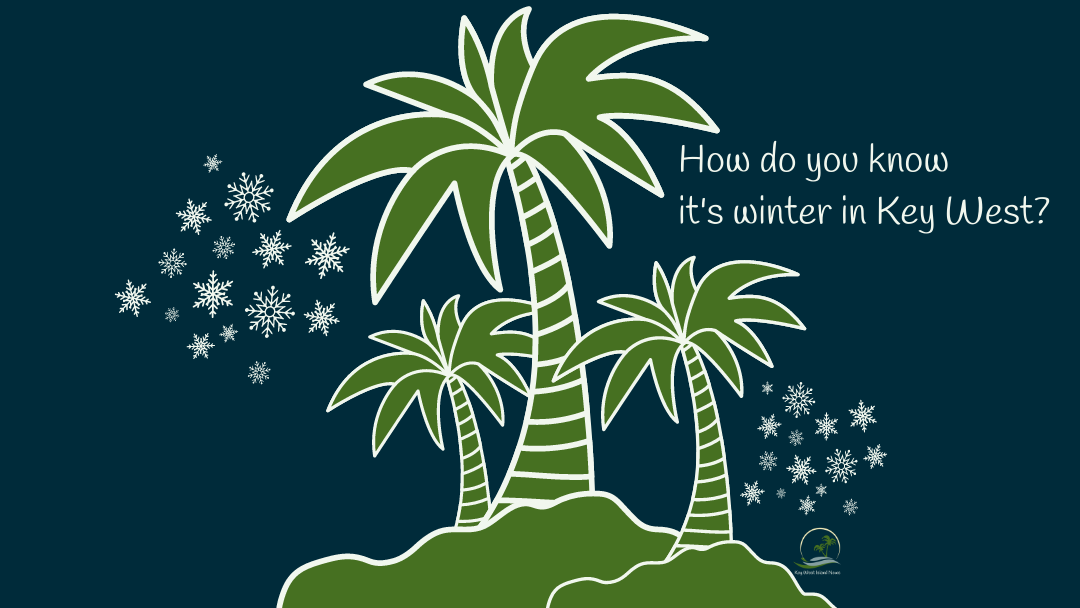 Monday we burned the hurricane flag signifying the end of the summer. Tuesday, we ’bout froze our tootsies off signifying the start of winter. I mean, it was 69 degrees Tuesday morning when I walked onto the porch to run a couple errands. Sixty nine! I went back for a jacket. Not socks or long pants. Not yet.

PS: The mask felt pretty good actually. Warmed up the air for breathing; kept nose and cheeks toasty. I briefly considered if it could double as a hat, which, of course, it could, except that my ears would be exposed to the chilly nip. And, it’s hard enough keeping up with one mask, much less two.

Back to the point. On Tuesday, winter arrived in Key West. I realize my off-island friends, those children of northern lands where temperatures drop and snow piles up through June, that Key West winter sounds like an oxymoron. How can sunny skies and temperatures in the 70s and 80s be winter? I understand.

There was a time in my life when I didn’t wear a coat if the temperature were predicted to be above 32. When I would think nothing of chatting up the next door neighbor curbside wearing nothing but street clothes while the wind chill hovered at minus 20 degrees. When 45 degrees meant shorts.

Today my blood runs thinner, my internal thermometer reset to tropical. To outsiders, our winters look like Michigan summers but there are seven for sure signs it’s winter in Key West even though everything’s green and flowers are blooming.

We’re growing tomatoes. Well, some of us are growing tomatoes. Others of us, which includes me, failed miserably and have returned to buying the gassed kind at Publix. The point is, if you’re going to grow vegetables and herbs outdoors in Key West, you’d best do it between December and March. Otherwise, it’s so hot and humid that what doesn’t burn to cinders in the sun boils to mush in the ground.

We’ve set the pool heater to 90. I realize some think that’s approaching bathtub temps, but there’s nothing redeeming about pool water at ambient temperatures of 70-80 or so. We who have solar panels to heat the pool water, dig out our solar pool covers because though the sun does a decent job of daytime temps at 90, that warmth escapes at night.

We do not do water sports. OK, so I am sure there are exceptions among the hardy, but normal people do not snorkel or do ocean swims in the winter. With ocean temperatures at roughly 75 degrees in the winter, only someone from, say, the north woods would jump in. Makes sense when you know that Lake Michigan this past July was 75 degrees — 11 degrees warmer than normal. If we’re boating or kayaking, we’re wearing at least a jacket with a hoodie.

Our jackets, gloves and hats are ancient and stink. There’s nothing particularly fashionable about the winter clothes we drag out. Most of it is whatever we had on our last venture into the north lands and after six months in the back of the closet, they’re likely to smell suspiciously of damp. Best toss them into the laundry before it gets any chillier.

We’re the ones wearing jackets, gloves and hats with flip flops and shorts. It’s got to be way colder than 69 to justify long pants and “hard” shoes. Heck, we’ll put on a pair of knee-high socks with the flip flops before pulling out long pants. One of Key West’s hilarious vignettes is summer-wear tourists being served by winter-wear locals. Trust me when I say we can spot tourists two blocks away in February. They’re the ones sans hooded sweatshirt. Off-islanders can blend in during the summer; not so much in the winter.

We brag about not turning on the heater. I’d been in Key West for four winters before I realized the H in my HVAC stood for heat. I’d accidentally flipped a switch and could smell that dust-on-the-hot-coil hallmark scent. Who knew? We actually had heat in the house. Have turned it on twice since then. Because, sometimes an inside temperature of 68 is too darn cold.

And, to round out the seven: We take bets on when the iguanas will drop from the trees. You see, iguanas are cold-blooded reptiles that can’t regulate their body temperatures. When the temps drop to 45, iguanas go dormant and let go of whatever they’re holding onto; hence plummeting reptiles. At 32 degrees, they’ll freeze to death. Forty one degrees is the coldest ever in Key West; happened twice, once in 1981 and again in 1886. We don’t see a lot of frozen iguanas. Don’t take the bet.