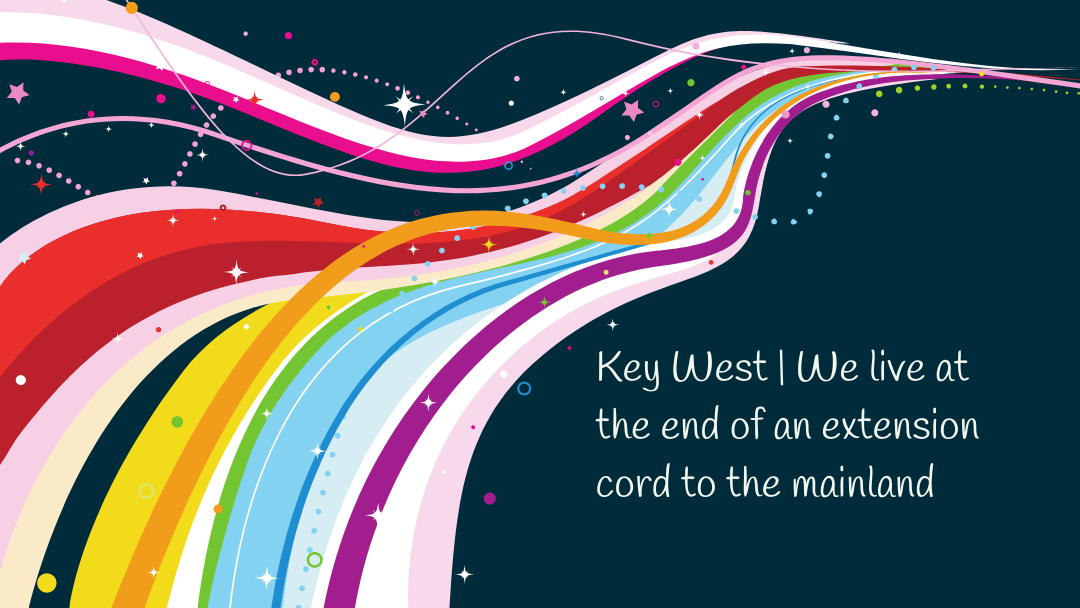 The scariest thing about living in Key West? Those umbilical cords to the mainland

Oh, how we love saying we live on an island, a tropical paradise at the end of the road. A place of magic and myth, where that mystique is captured in every trop rock song, in every step along the Fort Zach shoreline, in every child who giggles joyfully in the Truman Waterfront Park’s splash pad, in every sunset sail or afternoon at the sand bar.

Until (cue the wailing and gnashing of teeth) the internet goes down. We live at the end of an extension cord.

Modern day Key West (loosely defined as any time post-1942, which I’ll get back to in a minute) has long lost any conscious understanding that we are an island a couple hundred miles out in the water at the intersection of the Atlantic Ocean and the Gulf of Mexico. We’re the proverbial sitting duck for a wandering Category 5 hurricane; sooner or later we’re going to face down a direct hit and likely won’t be planning a Christmas parade any time soon thereafter.

The five fragile umbilical cords to the mainland are scarier than a Cat 5. Key West depends on the mainland for (1) water; (2) electric; (3) internet/cable; and we depend on the (4) 42 bridges down 128 miles of highway and (5) an airport in a wetlands to haul in everything else.

After a hurricane we get a taste of what life on the island is like when those umbilical cords are cut. I remember as Hurricane Irma was blowing her last gasp in September 2017, there was a brief (and, thankfully, erroneous) report that the Snake Creek Bridge was out. That would have meant weeks, perhaps months, of repairs and replacement — making it all but impossible to use the Overseas Highway to reach Key West by land, a devastating turn of affairs.

A month ago, a trash truck caught its “clam” in a tangle of wires on a utility pole in Islamorada and telephone, cable and internet service to every household, business and governing body went dark for hours. We couldn’t post outrage on social media, much less conduct business or reach 911. It was not pretty. Plus, there is this question: What it the heck are these companies doing? Those wires looked worse than the mess behind my desk. Oh, wait. It’s cheaper to do it that way.

Key West got its first electric in 1889, generated on the island. Almost 100 years later, in 1987, our electric grid hooked into the mainland. We import almost all our electric with a bit of local generation possible for emergencies. To this day, if you Google City Electric Key West, the old name for our power company, up pops its successor Keys Energy.

Our water is a gift from a partnership among the U.S. Navy, the feds and the Florida Keys Aqueduct Commission (now Authority). On Sept. 22, 1942, the first water through the pipeline arrived in Key West from Florida City — a then six-hour journey, depending on the rate of flow. Prior to the pipeline, Key West’s water supply was at the mercy of the rain and cisterns, which were used as collectors — and water was always in short supply.

The first Bell telephone system came to Key West in 1901, and the first international call — via telegraph cable — was made between Key West and Havana on Christmas Day 1900. Today, our phone “lines” begin on the mainland via cable strung from pole to pole, bringing us cell phones, television, social media, Netflix and credit card readers.

Key West is no self-sustaining island. We can’t grow food beyond an occasional $50 tomato and a few fruit trees. (We do have seafood; I’ll grant you that.) We don’t generate electricity. We have marginal water sources. We have no idea how to function without a telephone, much less a digital platform.

The ease with which our island can be isolated is astounding. Hurricane. Terrorist attack. Trash truck. Or just an irritable drunk with an ax to grind. We have no plans, I’m sure. How could we? There’s no amount of money, no political will that could fix that.

Instead, I’ll continue my search for someone to re-activate my cistern. Unlike many around town, we didn’t blast ours out or turn it into a dip pool. But it needs some care and I’m not climbing under the back porch to work on it. Feel free to send me suggestions.