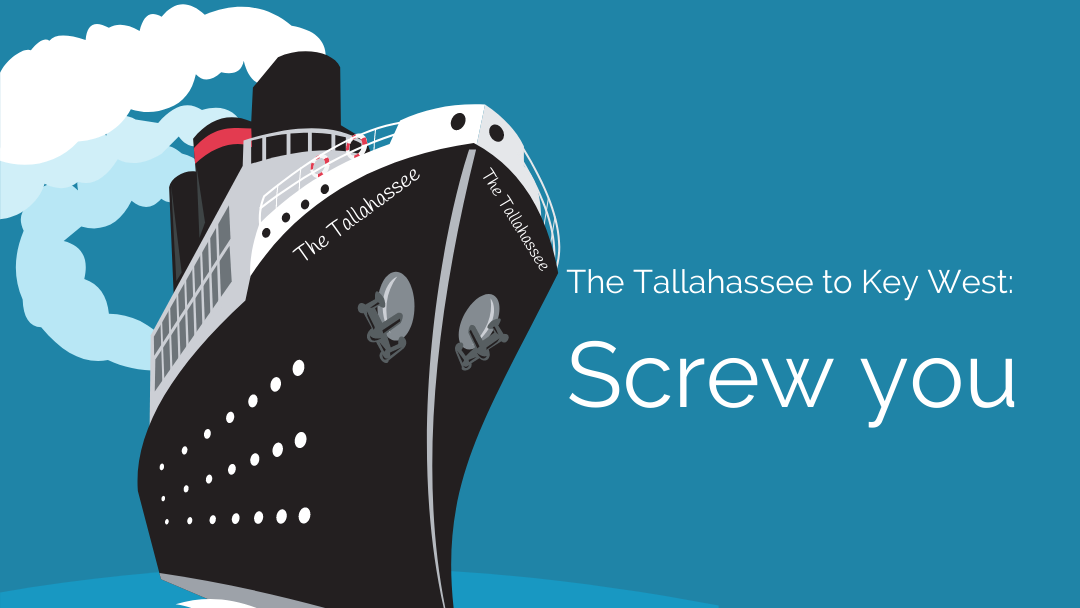 The scariest words in Key West: Tallahassee is now in session

Come Tuesday, the Florida legislature sits down to a banquet of tasty preemption legislation for a 60-day feast determined to remove even the table scraps from the state’s now-toothless Home Rule law.

Among the first-up will be a spit-in-your-face attempt to circumvent the 2020 Key West cruise ship referendums and overturn 200 years of maritime history. The three referendums passed with overwhelming majorities ranging from 61 percent to 81 percent. The reaction from the cruise ship industry, the harbor pilots and others was a significant pot of “dark money” as reported by the Miami Herald and an apoplectic flurry of lawsuits, threats and now a takeover attempt by the state.

State Sen. Bill Boyd (R-Bradenton) has introduced a four-page piece of legislation, SB 426, that, distilled to its essence, says: Screw you, Key West.

A companion bill, HB 267, in the Florida house is identical. The house bill was introduced by Tyler Sirois (R-Brevard) and Spencer Roach (R-Lee County.) The senate and house bills have been referred to various legislative committees.

The bills’ language can be boiled down to this: “local government may not restrict or regulate commerce in the seaports.”

It won’t be long before the reconciled bill wends its way to a full vote. If Florida legislative precedent holds true, the final legislation will get the governor’s signature — and Key West will give up complete control of its port to the state — on or around March 31, 2021.

We get more cruise visitors per capita than any port in the continental United States: more than a million a year to an island of 25,000 residents. Although cruise ships bring 50% of all tourists to Key West, they bring only 6% of tourist spending. Big ships don’t bring big money to Key West, but they do bring big problems.


“Our fishermen say over-large cruise ships have degraded spawning grounds and reduced their catch. Business owners say that when large ships are in port, the higher-spending hotel guests avoid shopping and dining downtown.”

Unless I’ve missed it, which certainly is possible, there’s been crickets from Monroe County elected officials at the county and state levels. So I emailed them a simple question and added in U.S. senators Marco Rubio and Rick Scott and Rep. Carlos Gimenez for good measure:  “What is (name)’s position on Florida HB 267 and Florida SB 426, the preemption legislation that moves control of Key West’s port to the state? This legislation will affect all ports in Florida with ripple effects through U.S. maritime law.”

I’m not holding my breath on responses, though if county commissioners, including Craig Cates and Eddie Martinez, who represent Key West, don’t speak up, I can assume they’re happy to let the state run Key West.

This is by no means the first time the Tallahassee power machine has told Key West and the Florida Keys to fall in line with state wisdom. We long ago lost any significant lobbying clout at the state level. We’re 10 hours away by car and on another planet from the mainland. Not even our recent purple-drifting-red voting patterns get us an assist. Most of us have to Google the names of our county and state elected officials. They rarely appear in Key West and are, I am sure, grateful for Covid-19 since they can pretend to care via Zoom.

The assault on Home Rule isn’t a Republican phenomenon, though they’ve certainly raised it to an art form. When Democrats ruled Florida, they, too, wanted no part of upstart counties and cities. Tallahassee preemption has taken away Key West’s control of its tree canopy, the regulation of e-vehicles and gun control ordinances. Our local vacation rental rules barely survive under the annual attempts to overturn them.

If Tallahassee gains control of the Florida ports, about the only thing Key West will have control over is the color of our picket fences.

(Disclosure: I have contributed financially to Safer, Cleaner Ships — you should, too — and I voted for all three referendums.)