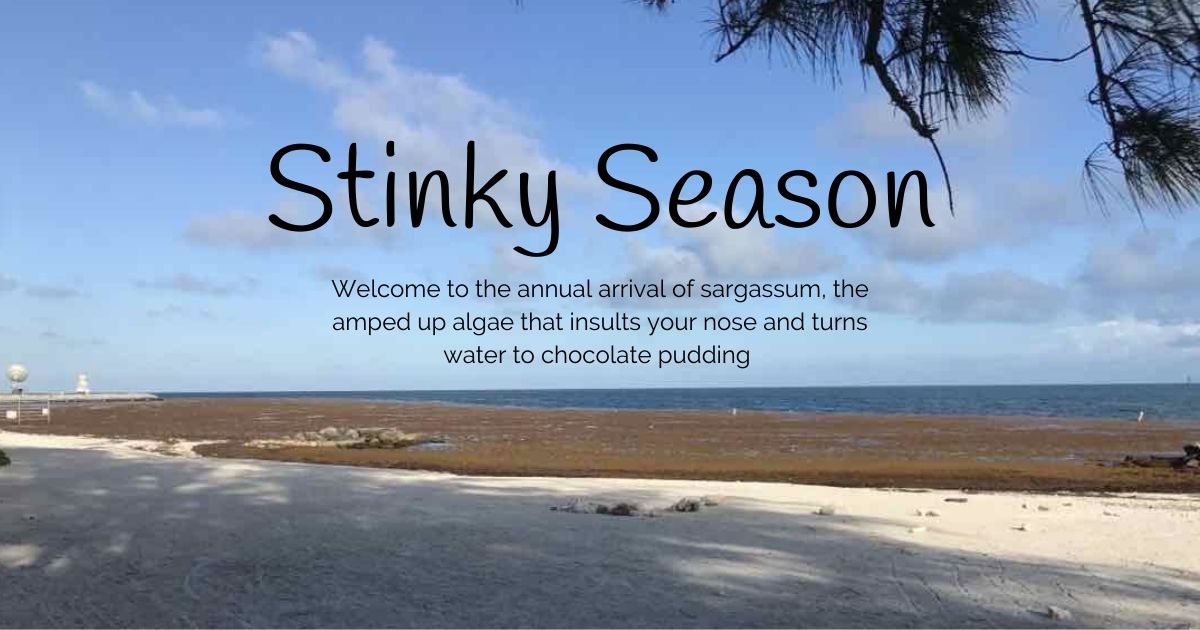 How about we go down the shore for the afternoon, asks a house guest eager to explore Key West beaches. (Clearly a Jersey girl if she’s using that down the shore thing.) So, we pack the chairs, towels, sunscreen (zinc; reef safe); a couple of adult beverages (illegal); red Solo cups (hides the illegal), snacks and sunglasses and off we go.

I don’t have the heart to warn her: That smell? The one reminiscent of faulty septic systems and dead sea creatures? Those piles of decaying seaweed well up over your ankles? That chocolate pudding sludge at water’s edge? She’s gonna take one sniff and one look and suggest we go to the pool. There will be complaining, of course, about how no one warned her, about how “they” ought to clean it up; about how Key West beaches are a sore disappointment. (Of course they are; we tell visitors that all the time but they don’t believe us. Where are the best beaches in Key West? Pensacola.)

Welcome to the record-breaking 2021 sargassum season in the Florida Keys.

Sargassum season arrives in late May or June and sticks around through hurricane season, which ends Nov. 30. Some years it’s worse than others; 2011 and 2018 were record-setting. This summer is on pace to match or exceed those years. Interestingly, the 2020 sargassum season was pretty light and scientists are trying to figure out why. Maybe Covid-19’s massive, worldwide shutdowns cut back on the befouling of major rivers like the Congo, the Mississippi and the Amazon. The Amazon nutrient plume, for instance, extends 620 miles from shore — and the sargassum loves that hyped-up water.

It’s not as though sargassum just up and appeared one day. It’s been around forever and provides critical cover for baby turtles who live within those blooms until they are ready to face the open ocean. There are accounts of sargassum in the earliest literature; Christopher Columbus noted it and called the area where he saw it in 1492 the Sargasso Sea.

Here’s what you need to know about sargassum season in Key West and the Florida Keys. We’re most certainly not going to get this information from an island marketing campaign.

Sargassum is NOT seagrass. Sargassum is an algae. You can also call sargassum a seaweed. But never seagrass. Seagrass roots in the sand in the water and has long blades. You’ll see fields of seagrass in the shallow waters off our beaches. (If you must walk through them, please do so gently. Best to go around.) Florida has lost about 50 percent of its seagrass since the 1950s due primarily to development along coastal waters, boating impacts and water quality declines.

According to NOAA, “Floating rafts of Sargassum can stretch for miles across the ocean. This floating habitat provides food, refuge, and breeding grounds for an array of animals such as fishes, sea turtles, marine birds, crabs, shrimp, and more. Some animals, like the sargassum fish (in the frogfish family), live their whole lives only in this habitat. Sargassum serves as a primary nursery area for a variety of commercially important fishes such as mahi mahi, jacks, and amberjacks.”

Sargassum stinks but it doesn’t sting. Some folks claim sargassum “stings” them. Nah. Not the sargassum. It’s harmless. But, the microscopic sea creatures (think jellyfish) that live within the floating pads? They tend to get mightily annoyed when you invade their home. That stink is hydrogen sulfide gas, which is mostly just bothersome. However, people with asthma or other respiratory illnesses might want to avoid the worst days because the gas can trigger unwelcome reactions in the eyes, nose, throat and lungs.

The city and county clean their beaches. The state does not. If you rise with the morning sun for your walk along the beach, you’ll often find city and county workers plowing through mounds of sargassum and hauling it away. That means beaches like Smathers and Higgs look and smell halfway decent for part of the day. That’s the stuff on the sand. The stuff in the water? Well, it stays in the water and relentlessly floods back. The state doesn’t even bother. The beach at Fort Zachary Taylor State Park is piled high with sargassum and the floating pads extend far from shore. And it’s going to stay that way until a storm comes in and washes it away.

You can’t get away from it. I see posts all over travel websites asking where folks can find beaches without sargassum. For sure, there’s no escape anywhere in the Caribbean, Florida, Mexico’s gulf-side resorts or Central America. The University of South Florida does a great job tracking the sargassum flow, so if you’re traveling, it’s a good resource.

Thank your nose. Within a couple minutes your nose shuts down its sensors. Stink gone. Breathing resumed. Just don’t breathe too deeply over your coffee. Coffee and coffee beans “clear the nose palette,” so to speak and you’re back to the stink.