Well, that was fun. Perhaps Key West should have a hurricane prep drill every year like Tuesday’s Tropical Storm Elsa. Because let’s be honest, we don’t expect a hurricane until, say, September, even though the season officially begins June 1.

We may do some desultory prep in early summer, like buying an extra roll of toilet paper when it’s on sale. But we don’t get to the serious stuff, like counting the nuts and bolts for the hurricane shutters, until after Labor Day. Oh, we know we should; we just don’t. (Although, truth be known, most of us have a huge stash of hurricane-prep-like stuff — think paper towels, bleach, wipes and TP — left over from our Covid-19 panic shopping.)

Last week when we saw Tropical Storm Elsa roiling around out there, I was like, oops, do I have batteries? Then I promptly forgot to check my hurricane boxes until Monday night when it was, shall we say, too late. Fact is, we tend to get pretty blase about hurricane prep. The last big storm was Irma in September 2017. Big Pine and thereabouts took the brunt of it. Key West came through relatively unscathed, adding a whole new layer of “we’re gonna be just fine” to our hurricane hubris.

That’s especially true early in the season and when the forecast tells us it’s “just” a tropical storm. I mean, a tropical storm is just a big version of a summer thunder boomer, right? Surely, it’s business as usual since there are no mandatory evacuation orders and tourists can stay, right? I mean I can get my coffee and breakfast delivered as usual, right?

Uh. No. Not right. A tropical storm can ratchet up its attitude in hours, going swiftly into hurricane mode. Tropical storms can cause major flooding, especially at high tide, which happened Tuesday. Power outages, street and house flooding, trees down, roofs damaged. All that goes with a tropical storm. The only difference between Elsa and Irma was the intensity and duration.

As boring as storm prep is, we risk our lives when we take it too casually. Ergo, note hurricane boxes aforementioned. 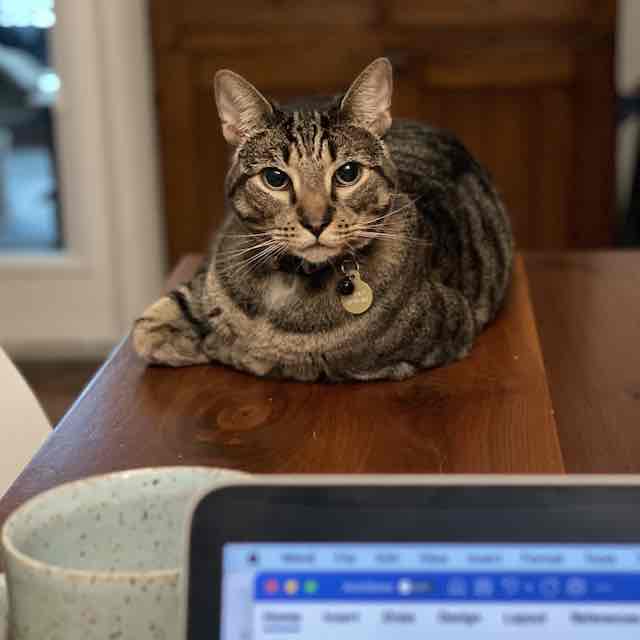 Michael the Cat 5 keeps me company during Tropical Storm Elsa

After Irma I learned to keep hurricane boxes updated so I didn’t have to start from scratch each year. Now, I drag them out in June, remove and replace things like first aid stuff, make sure the “use by dates” are still good and add canned goods and cat food that don’t have the shelf life of say, toilet paper.

There’s always a go-bag behind my desk with stuff we absolutely need if we’ve got to get out in a hurry, copies of important docs with a backup flash drive, chargers, a change of clothes, basic tools, duct tape, flashlights and first aid.

We also finally conceded to buying a small generator that will power a window air conditioner or a refrigerator. No need for anything more since solar chargers and our propane stove top handle the rest of what we need.

This past week’s skirmish with Elsa added four lessons to hurricane prep:

Clean house and do laundry the day before the storm. Not because you want to be wearing clean underwear should you need a rescue (though that’s a courteous thought), but because when the power goes out — and it will — who knows how long before those chores get done. That dozens of others and I did this automatically probably is a result of generations of instinctive behavior.

Lower the water in the pool and turn off the pump. I forget this one every time. On Tuesday, the pool filled to overflowing and the power outage meant potential pump damage when it attempted to re-start. Next time. For sure. PS: I did disconnect electronic equipment and such last night and we turned off the AC this morning. No point tempting power surge havoc. Been there; done that. Learned an expensive lesson.

Get on the tree man’s schedule earlier. We lucked out with Elsa, but it was touch and go with the huge trees around our yard. We get them trimmed each year before the height of the hurricane season, usually in late August or September. Looks like we ought to back that up a month or so. On the other hand, Elsa happily did what we could not: Knocked down the three dozen remaining mangoes. Thank you.

Find something to do — other than open the refrigerator door a hundred times. Ranger Ed and four of the Cat 5s are perfectly happy to curl up in a big, ol’ cat pile for the duration. Meanwhile, Michael the Cat 5 and I wandered from window to door checking things out. He because he wanted to know each bump and blow; I because I was bored. So, I wrote my column. Grin.