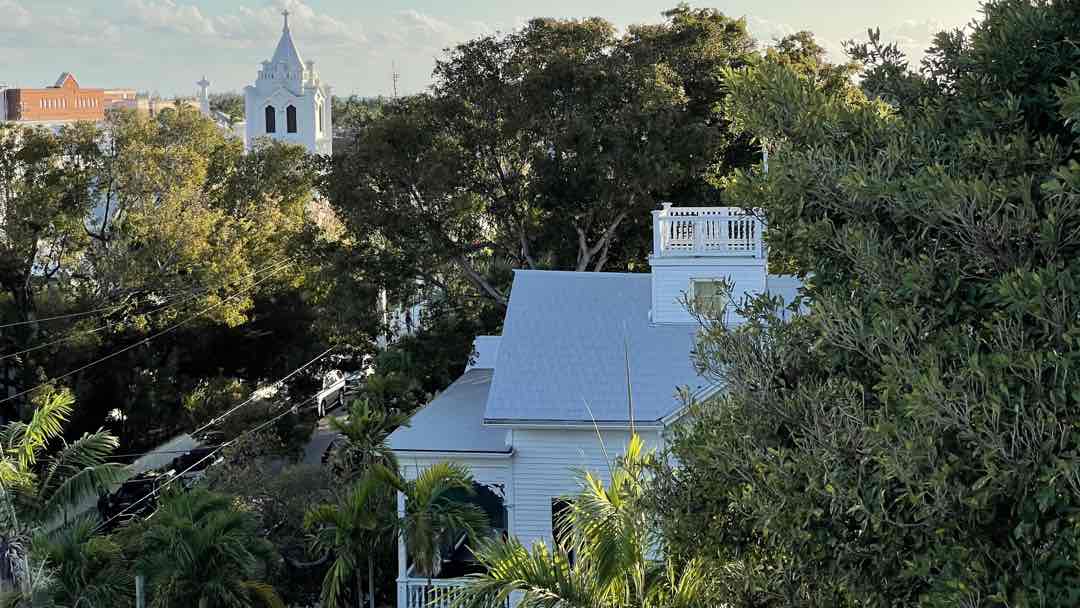 Let’s get this out of the way first. What with climate change, Covid-19, and a global plethora of crumbling cultures and governments, not to mention that Amazon Prime’s two-day delivery guarantee is now akin to “someday, for sure, but definitely not today,” I really ought not be whining about annoying things in Key West. I mean, really, I live in Key West. But, on the days when I am wearing my old crone garb, well, I get crotchety.

Which is exactly what happened this morning when I went foraging at new Publix. (Why do we persist in calling it “new Publix”? It’s been more than a decade since it was Albertson’s, but, there you have it. Actually, you know why, right? To tell it apart from the other one, farther along the boulevard, which has been known forever as “gay Publix,” which is a story for another day.) Anyway, back to the point. I went grocery shopping and darn near ran smack into a cart parked precariously mid-lot.

Voila. The first of five (slightly) annoying things in Key West — and probably most everywhere, humans being pretty much the same worldwide:

People who abandon shopping carts. This morning there were more carts abandoned catawampus in parking spaces and smack in the middle of the street than were in the corrals. I swear there was one cart whose “owner” must have loaded her groceries, moved the cart, backed out her car, gotten out of the car and pushed the cart right back into the now-empty spot. The cart corral was three cars down. What is wrong with these people? (I wanted to write that in ALL CAPS but decided it looks weird in print and I am not Dave Barry.)

Publix provides a cart corral about every 10 parking spaces and I round up as many as I can (I’ve gotten pretty good at it, so I can do, like, five at a time if I stretch.) I chatted up a long-suffering Publix staffer who is one of several who spend their shifts riding herd on the carts, because, heaven forbid, there be no carts inside. That’s total freak-out time since what grocery shopper could imagine actually grabbing a cart from the corral and pushing it inside? She says they find carts miles away.

Which brings me to number two, people who walk past litter. If you don’t have a pair of gloves and a trash bag, bending down to pick up some potentially snotty Covid-19 mask curdles that great snack you had earlier. I’ll give you a pass this time. Ditto with cigarette butts and things I call too-much-Duval-Street-fun. But, blind-eyeing a plastic water bottle or beer can? When you nigh tripped over ’em? Come on, now. Pick it up, toss it in the back of your car or bike basket. Won’t kill you and, anyway, after 18 months of Covid protocols, surely you have some hand sanitizer at the ready.

Number three: People who can’t see old people. As any old(er) person will tell you, there are distinct advantages to that magical moment when one becomes invisible. No one cares if I’ve combed my hair or there’s a mustard stain on an otherwise perfectly good shirt so I still wear it. I tend to get irritable, when, as happened last night as we were walking into Half Shell for supper, a family of five — two parents and three early-20-something boys — darn near mowed me down in their exuberant race to get to the front of the line. I will add, though, that one of the boys had the good grace when I harrumphed a bit, to apologize.

Number four: People who treat their servers like servants. These days, what with Covid-gone-crazy, supply chains run amok and staff shortages so short that places have curtailed hours or closed, I am shocked at the entitled arrogance of people who plop their butts in a restaurant table chair or bar stool like they were visiting royalty — and then stiff the wait staff or the bartenders because service wasn’t prompt enough. Ranger Ed and I spent three hours at Schooner Wharf a couple weeks ago for what pre-Covid was a 90 minute thing. That poor young woman, who’d been on shift all day and was covering for three people who didn’t show up for work, remained courteous, smiling and diligent through it all. We weren’t in any hurry so we dispatched her to tables elsewhere where entitled demands rumbled and left her what I call a “Gramps and Grandma Donna”-sized tip.

And, number five: People who whine. As my mother would say, “Hush now, you live in Key West.”