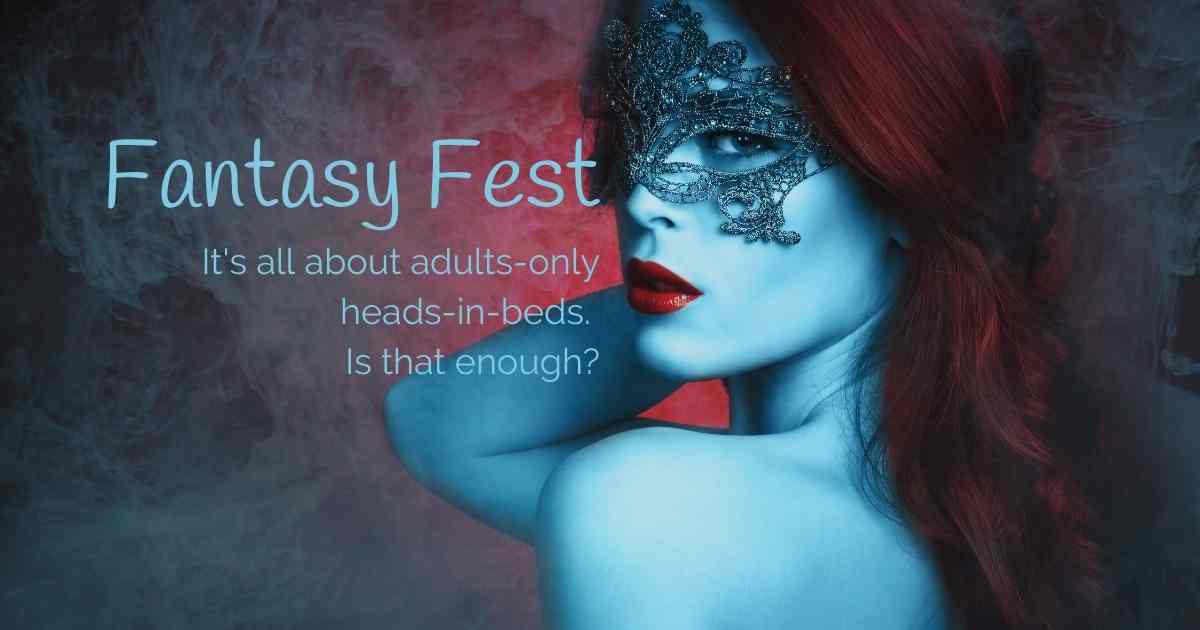 Key West Fantasy Fest | How long can it hold on?

Since 1979, Key West’s Fantasy Fest has been the gorilla of annual events. Created by a small local group as a way to jump start the island’s late summer doldrums as hurricane season came to a close and before the snowbirds migrated south, Fantasy Fest brings 25,000-100,000 visitors at the end of October. The visitor numbers vary as wildly as the body paint, depending on who is trying to prove what. Fantasy Fest accounts for — again, depending on who is touting what — upwards of $30 million to the local economy. I once loved Fantasy Fest.

From its rather inauspicious beginnings, Fantasy Fest became the prom queen with whom everyone wanted to dance. Goombay Festival. The Royal Campaign for Fantasy Fest King and Queen. Zombie Bike Ride. That Pet Masquerade thing. The “locals parade.” Sunday’s “fat lady sings” La te Da Tea Dance. It didn’t take a marketing degree to know attaching an event to Fantasy Fest would guarantee publicity and a built-in audience. From a couple days in 1979, Fantasy Fest is officially 10 days long.

This week in a preemptive move likely designed to lower the escalating controversy about whether Fantasy Fest should be shut down as Covid-19 numbers soar, festival organizers canceled two of the three hallmark events: the Saturday parade and the Friday and Saturday street fair. Still in limbo for a later decision is the Friday night Masquerade Parade, a popular event for locals.

This is the second year Covid-19 has shut down the public-facing, marquee Fantasy Fest events. They’re the ones even jaundiced, crowd-weary locals might venture downtown to watch. With them sidelined and with events like the Royal Campaign for King and Queen and the Zombie Bike Ride canceled, I’ve got to wonder how much longer this 42-year-old event can hang on. Local support for Fantasy Fest has worn thin as raucous crowds supplanted the once blushingly edgy festival with an event better served for swingers and escapist fantasies. Two years of Covid cancellations of the things locals do love about Fantasy Fest season exacerbate the discontent.

As the years since 1979 rolled along, the marketing and events shifted to adult-fantasy; so much so that Fantasy Fest organizers now (thankfully) sort of segregate the schedule between regular stuff and its “little black book,” a separate page that asks if you’re 21. It takes a strong stomach to go downtown during Fantasy Fest what with the cheek-by-jowl crowds, far too many of them topless, bottomless or both, despite rules about “no nudity.” I mean, really, do you want to be seated on the bar stool just vacated by a drooping baby boomer’s semi-very-semi-clothed tush? Oh, ekk….

A once manageable event that drew visitors in search of their own piece of Key West Mystique has sadly become more about the adult fantasy stuff offered at the private parties, bars, restaurants and assorted non-public venues. Fantasy Fest has always been about putting visitors’ heads in beds — with a respectable parades-and-costumes veneer so residents didn’t rebel completely. And if window dressing is all locals get, why should we pretend Fantasy Fest is a community event?

Fantasy Fest isn’t a city-sponsored thing. Key West issues permits for the public events, provides law enforcement and clean-up crews, but the closest the city can come to canceling Fantasy Fest is refusing to issue permits for the public events like the Saturday parade, the Friday Masquerade Parade and the two-day street fair. Everything else with the Fantasy Fest imprimatur comes under the auspices of the Tourist Development Association and We’ve Got The Keys, which since 2017, under the strong leadership of Nadene Grossman Orr, has done yeoman’s work to shift Fantasy Fest from fantasy to festival.

It’s not been enough. That will be evident come Oct. 22, when Fantasy Fest kicks off and thousands of folks descend on the island. Without the parades and events that keep locals connected, Fantasy Fest for the second year in a row is at risk of being nothing more than one big, questionable adults-only party.