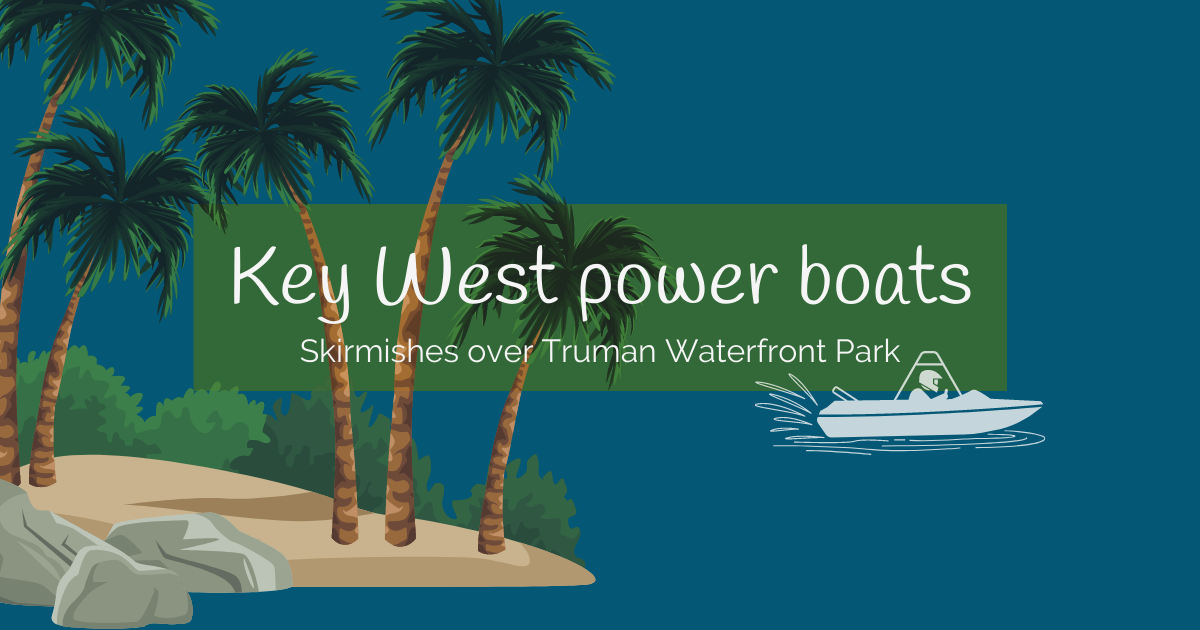 Key West power boats | Time to tone down the skirmishes

I’ve got about as little interest in watching the Key West power boats races as I do in watching the Atlanta Braves win the World Series. Pretty much not much. I’ve taken a book to a Cubs’ game and passed on a chance to do one of those Richard Petty “pretend to be a race car driver” things in Daytona. I’ve said yes to a Springsteen concert, then wished I’d stayed home and turned up the stereo. (Look it up if you’re unfamiliar with the term.)

Though I leave the cheek-to-cheek crowds, costs, noise and high-performance gear to the super fans, I totally get the adrenaline rush that becomes a body-slamming super collider. Heck, there’s science to back up our human penchant for loving the camaraderie of a crowd and the big noise. The louder, longer and more heart-pounding the better.

All that to say, most folks love the big-noise, big-crowd, energy-cranking power boat races. Not my cuppa tea. That I’m the odd duck sure doesn’t give me the privilege of dumping on their fun with misleading and accusatory posts on social media. And that’s exactly what happened as anti-race fans took to Key West social media with a vengeance.

Oh, the poor grass. Look at those brown spots and gouges. Our beautiful grass is dead. The trees. OMG, the trees; they’re in harm’s way. Save them. They better pay for all the damage to our beloved park. It’s impossible for locals to get to Fort Zach (dog park, waterfront, amphitheater, soccer fields). Damnation on the city because the fix is in. The city ought to charge them for the damage and we “know” they don’t.

Kudos to photographer and Fantasy Fest King Larry Blackburn for days of trolling those myriad social media posts explaining gently to anyone who’d listen that there was a contract, that the city enforced the contract, that the grass would (and always has) grow back and that the trees were fine. I admire his patience. He’s got the stature, so to speak, to command attention and I think folks listened. At least a little.

What was it like at the Key West waterfront park?

Still, I wanted to see for myself. So on the way to take Ranger Ed to work Saturday morning, I wandered around. Yep, big-butt, expensive toys parked everywhere. Flags flying (though I didn’t see the Confederate flags of years past; they likely finally understood that was not appropriate). Cars lined up at dawn for the Fort Zach gate to open, which it wasn’t going to do until Ranger Ed got there.

Was it annoying if one had planned on parking up-close-and-personal with the Coast Guard Cutter Ingham? Yeah. Was it a traffic nightmare? Yeah, if your description of nightmare is waiting in a line that stretched out of the park and into Truman Annex. The sheriff folks shut that down pretty quick and streamlined access. Was it loud? It was adrenaline-cranking loud. Were you going to get in a peaceful beach day under the pines? Not a snowball’s chance in July.

What about the manatees? Careless boaters, especially at high speeds in the no-wake and/or manatee zones, kill upwards of 100 manatees a year in Florida. (Thousands die of red tide.) That’s fact. But are manatees, turtles and assorted sea creatures at risk from the races? Likely not and there are fish and wildlife folks on duty. But, truth? I don’t know. There’d have to be a pretty complex conspiracy to cover up dead manatees and turtles on the shores of Fort Zach.

But, was the waterfront park a mess? No. I went back over mid-week, when things had been put back in place. With the exception of some brown grass patches and one pretty ugly slice of dirt ruts, which will need an hour or two of care and some water, you’d not know thousands of people had been there. Grass is a tough old thing. Give it some water, some sun and a couple days and it’ll need mowing. (Doubt me? Think Woodstock — and it rained there, which made things way worse.)

I did a Freedom of Information request to get a copy of the city’s contract with the power boat folks. It took them all of 22 minutes to email me the whole thing along with the commission’s resolution to grant permission for the event. Effective June 19, 2019, the contract is for five years or through 2023: They pay for damages. They have to clean up after themselves. They pay the city for each person who buys a ticket or parks at the event. They reimburse the city for any costs incurred by the city above the $5,000 deposit, including security and fire. The rules are decently strict and include a walk-through by the city and the organizers to determine what needs to be fixed and paid for by the race people.

So, here’s the deal. You might dislike the boat race and the people who love it. You might want them to pay more. You might want it all to go away. Go for it. But let’s at least argue from facts. It’s time to tone down the skirmishes.