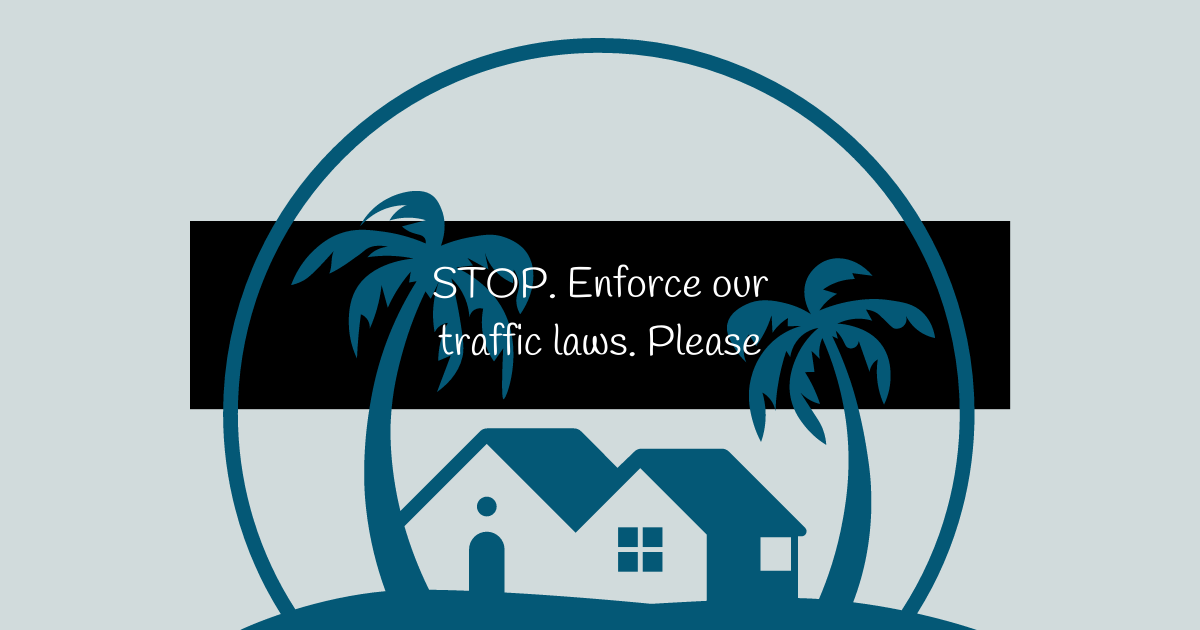 Key West traffic | Unless we ditch some vehicles, the island’s gonna sink

We have a rule in our house: For Ranger Ed it goes like this: Bring home a T-shirt; toss two in the trash. For me, it’s this: Buy a pair of shoes; toss one. (I don’t know why I need to buy any shoes since I only wear flip flops and sneakers. But there it is.)

We need a rule like that for Key West traffic: Add a transportation something-something; ditch one.

You’d think I’d get tired of whining about island traffic, but, heck, it’s right up there among the things Key West agrees upon. We’ve got too many motorized things clogging our streets. We’ve probably always had too many things clogging our streets, but then I wasn’t around when horses made merry piles of stuff to add to the summer sargassum stink.

After all, our streets were laid out a couple hundred years ago. Tiny streets on a tiny island, when both people and transportation devices were smaller and fewer. The island simply isn’t built to handle our crowds and must-have SUVs — and that includes the one I drive to the grocery store each week and off the island, oh, say, once a month, if you don’t count trips to Stock Island.

What started me on today’s whining was deciding on a bike rental for my grandson’s visit this week. Ranger Ed and I rarely drive when we are out and about in Old Town. Since it’s easier to bike to Fort Zach or up to the seaport, we figured renting a bike for nine-year-old Connor would be a good idea. That way we could all go together.

And, then I had visions of this suburban-born-and-raised kid pedaling in the bike lane across Southard to Zach and wobbling smack into the car lane, six inches to his left — and having to explain to his parents why we’d so woefully failed our kid-sitting duties. Look, I know real Key West kids bike all over the island. I see them whipping in and out, successfully dodging disaster countless times. They are city-raised bikers. I was, too, for that matter. But suburban kids? Gheesh, they’ve no concept of sharing Truman and Duval on a Friday afternoon.

There will be no bike and there’s every chance that Connor will be as thrilled about walking as I would be about driving to the butterfly museum.

It doesn’t take an official study to know there’s nothing good about Key West traffic. There are days when I’m sure we are one car away from the entire island sinking into the Atlantic. And, you know what?

Our alternatives-to-cars solutions have not improved things. In fact, they’ve made Key West streets more crowded and more dangerous.

Why is Key West traffic so bad?

Over the past decade, we have — quite rightly — encouraged alternatives to cars. We’ve told visitors they don’t need a car when they’re in Key West. Ride a bike. Rent a golf cart. Hop on a scooter. Get one of those three-wheel colorful things. And, they did. The number of bike, scooter and golf cart rental businesses soared. In the past five years, we added e-everythings. E-bikes. E-trikes. E-scooters (the stand-up kind.) If it could be electrified or gas-ified, we turned it into a people mover.

We now have a whole passel of moving devices whipping through intersections, darting from behind parked cars and racing down sidewalks and promenades, playing tag with pedestrians, motorcycles, scooters, cars and trucks, Conch Trains, tour buses and trolleys. The miracle is we don’t maim each other more frequently. I’m not betting we can continue that miracle. Someone is going to die. Maybe several someones.

Yep. It is a great idea to encourage the use of vehicle alternatives for those with the physical wherewithal to do so. Clearly, Key West has been roaringly successful at adding those alternatives and I suspect there will be more coming. But, we’ve been adding traditional vehicles at the same time. Ride shares, like Uber and Lyft, pack dozens and dozens of new vehicles into Key West streets. So does the explosion of golf carts and “fun” car rentals — and the TDC’s drive the Keys marketing campaign.

My friend Chris Hamilton does a terrific job of researching, explaining and offering solutions to Key West’s traffic challenges in his Car Free Cities blog. He knows the city’s transportation structures and he understands the context in which we must make decisions. Might want to bookmark his columns.

I’m not among the “anti-car” crowd. I don’t intend to give up my car. I suspect no one else will either. So, how do we fix this Key West traffic horror show? Enforce the rules. And, that means putting a whole bunch more traffic enforcement folks on the streets, writing tickets and collecting fines — big ones. Enough to pay for the additional staff with some left over to help with a housing stipend.

If Key West gets a reputation for enforcing existing street and sidewalk safety laws, we might — might — not kill and maim each other.