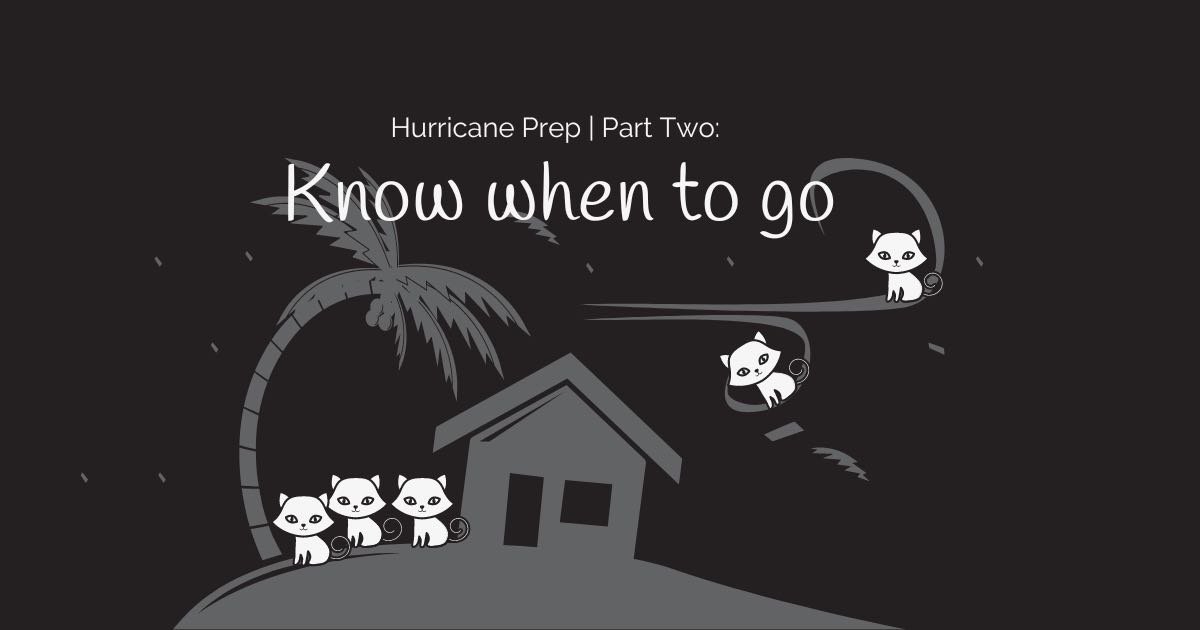 (Editor’s note: Second in a three-part series on Key West hurricane prep. Part One covers hurricane prep basics. Part Two helps decide when to evacuate and what to do. Part Three covers the how-to of sheltering in place.)

Next time you’re in need of a rousing, potentially chair-tossing, foot-stomping discussion that does not involve post-2016 politics or Covid, toss this one out: Are you going to leave? Little is so fraught as asking folks if they’re going to heed the mandatory hurricane evacuation orders and get the heck out of the Keys.

Ranger Ed and I used to be part of the heck-no-we-won’t-go crowd. We’re seasoned campers (tents, no toilets, pack in, pack out). We are “second responders” with the Monroe County Emergency Reserve Corps. And, it’s a major headache to wrangle five cats into five carriers and pray that someone will take us in.

We reconsidered after Hurricane Irma in September 2017. Irma wasn’t, as my dad used to say, “much punkin” when she crossed Key West, but her Cat 4 damage in the Lower Keys made for serious adjustment in that we-won’t-go strategy.

It was clear — at least to us — that our house and much of Key West would not fare well, to put it mildly, were we to be hit like Cudjoe and Big Pine in 2017. For all our unseemly island swagger about “surviving” Irma, Key West’s Irma experience was barely a tropical storm.

That’s when we bench marked “probably get the heck out” to a Cat 3. If a Cat 3 is forecast for Key West, we will be packed — with the Cat 5s, too — and ready to join the trek to safer locales. Anything higher? We’re gone. Lower than a Cat 3? We’ll decide at the last minute.

Most folks need to get gone.

Hurricane evacuation | How to know IF you should leave

When an evacuation order is in effect, you should leave the island if:

Hurricane Evacuation | How to know wHEN you should leave

Timing your evacuation can be challenging, especially if, as with Hurricane Irma, the hurricane path is unpredictable. Visitors are generally required to leave three-five days before the storm is expected to make landfall. I’d say most folks ought to be headed up the Keys and toward safety no less than a day or so after the visitors are kicked out.

If you’re planning on flying out, you’re going to need at least that much time to book a rare available seat.

A “last minute” departure ought be considered two-three days before landfall. Why? Because the Keys have to get some 75,000 residents and perhaps another hundred thousand visitors off the island chain in less than 48 hours. You know what traffic is like on a holiday weekend. Oh, and there’s the whole nastiness of the Seven Mile Bridge in hurricane-a-coming winds.

Gasoline will be scarce to non-existent the more you procrastinate. Ditto the closed restaurants, bathroom stops, official shelters or hotels willing to stay open for those coming off the Keys. You best have a family or friend way up the mainland, preferably inland, north and west.

If you’re going, go early. I know our Cat 5s will not be particularly welcome anywhere, but forcing our contingent on the kids in Atlanta beats, well, dead.

Hurricane evacuation | Prepping the house before you go

Whether you go or stay, house prep is the same drill. And unless you want to live buttoned up for five months, you’re going to do most of this in the week before landfall. This is our preferred order:

And, you’re done. Hunker down or hit the road.

The best links for hurricane Evacuation and prep information