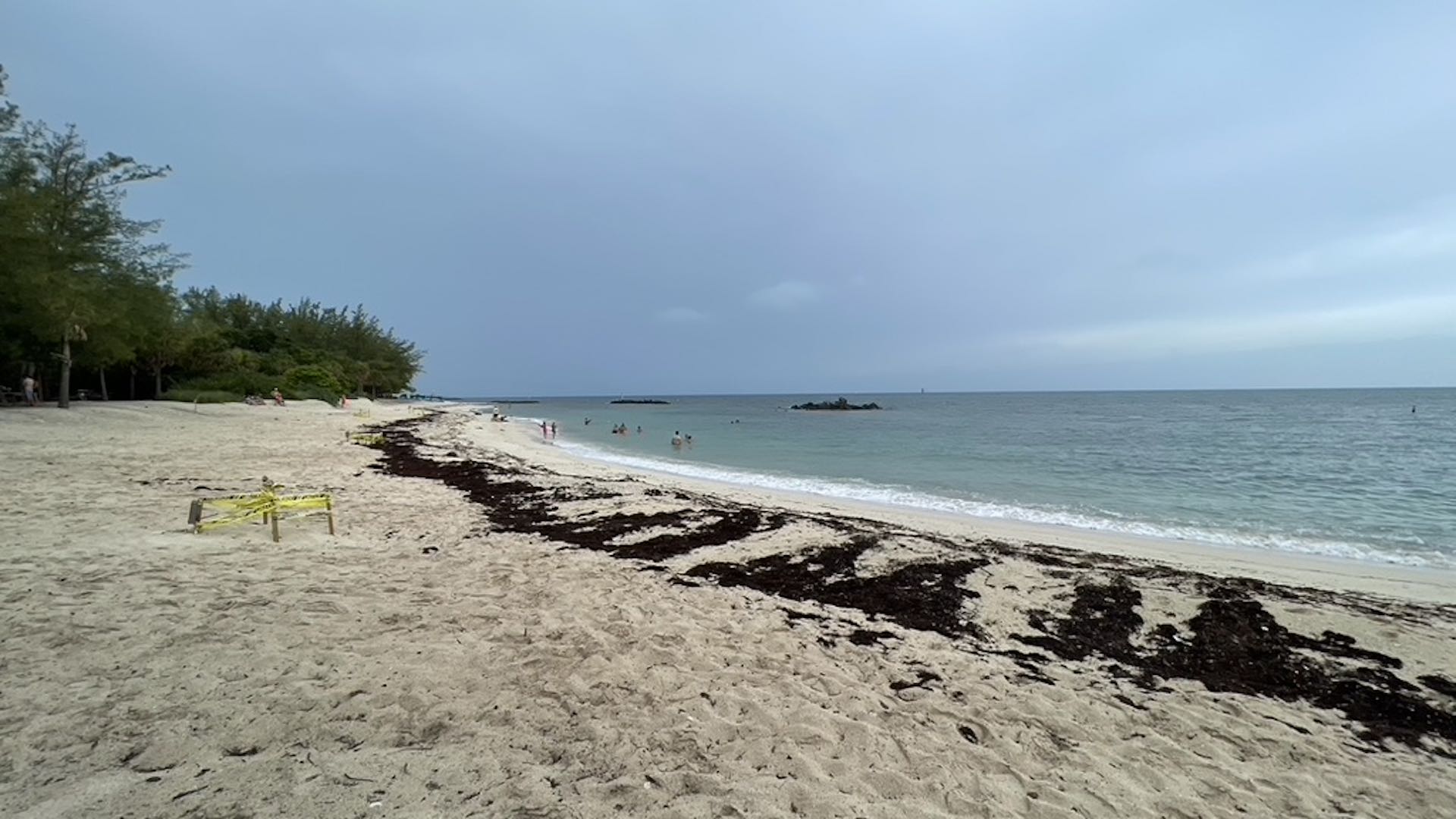 If you want a happy-face spin on the state of Key West sargassum 2022, you best look elsewhere because — wait for it — Mary, Joseph and the Wee Donkey, that black, decaying algae is piled up past my thighs, the off-beach waters are a gooey chocolate sludge and the smell, which can darn near knock you down at first whiff, permeates the island 10 blocks in from the shoreline.

Summer 2022 sargassum blew past previous records for June; July dropped a tad and August is pending, but the University of South Florida, which tracks sargassum, says there’s so much sargassum floating in the open waters right now that we can expect what they call “beaching” for at least a couple more months. In short, if anyone is telling you beaches in Key West, the Keys or on the east coast of Florida are “fine; just a normal summer” you ought ask them if they’ve been outside recently. Either they’re fibbing or the only Key West “beaches” they’ve seen recently are at the sand bars.

“It’s just too much of a good thing. This is a new record amount of Sargassum in summer 2022 that we’re seeing in the Caribbean and beyond,” said Brian Lapointe, a principal investigator of ecology and water quality at Florida Atlantic University’s Harbor Branch Oceanic Institute. “It’s affecting coastal ecosystems, sea grasses, coral reefs, — they’re all being affected by this huge excessive amount of Sargassum.”

LaPointe has studied Sargassum for more than three decades, and has yet to see a statewide influx as prolific as the current wave. He said he’s received reports of Sargassum globs as thick as 5 feet in the Palm Beach Inlet that are preventing sea turtle hatchlings from getting to the beach. He’s also heard of beaches in Key West stained a muddy brown.

But, argue many locals, this happens every year and who cares if visitors stop coming because the beaches are nasty? We don’t want them anyway, they say, and since sargassum is “normal,” it’s not harming the environment.

Sargassum is a fact of summer life. Indeed. And in the right amounts, sargassum is critical to the environment. The catch? The sargassum we’ve dealt with since 2011 is not the sargassum of long-timer memories. For more than a decade, sargassum beachings have escalated and the record-setting past four years are raising alarms. So much so that scientists have upped their research and local municipalities are beginning to realize they’ll need more than a couple of tractors to manage summer beaches.

Some Key West folks seem to get a certain pleasure in cheering any reduction in visitors. I get it and I am too frequently among them. The Keys struggle under the load of hundreds of thousands of visitors, vehicles and vacations. But that “I’m here now, so pull up the drawbridge” culture is as unproductive as is the “sargassum happens every summer” crowd. Managing sargassum will take a heavy lift among the city, county, state, federal and local business owners. Though helpful and great for photo ops, a handful of diligent locals with rakes isn’t going to put a dent in the sargassum. Managing it will be a multi-million dollar effort just in Monroe County.

The Key West Planning Board at its 5 p.m., Aug. 18, meeting at City Hall will consider a proposal from Sunset City, LLC (the LaSalle Hotel Operating Partnership located in Bethesda, MD) and the Matilde Generosa Ramos Rev. Trust to install at South Beach a floating seaweed barrier anchored to submerged land owned by the applicant and by the State of Florida. The project would divert sargassum back into the channel and minimize the sargassum beachings.

The planning board staff recommends approval of the proposal with additional provisions for monitoring of adjacent and downstream properties that could be affected negatively. Directly downstream are the beaches of Fort Zachary Taylor State Park. Finding the appropriate balance between cleaning up South Beach and protecting Fort Zach is imperative if and when the project goes forward. Most of my concerns (turtle nesting, environmental impacts and long-term monitoring and maintenance) are addressed in the proposal and staff review. At first read, I’d say the project has merit and South Beach is a good location to test the efficacy of these permeable barriers (they aren’t nets). You can find the full report HERE.

The economic impact (lost value added) from a severe sargassum year is estimated at $20 million in our midpoint estimate, which would lead to a nearly $3 million decline in state and local tax collections and 300 lost jobs in Monroe County. From an ROI standpoint, it is important to weigh this impact against the estimated cost of mitigation, which we estimate to be between $3.4 million and $17.8 million.

What can be done?

The Rockport Analytics report went on to recommend the county ask and answer at least five questions. I’d suggest this be a collaborative effort that includes every governmental, environmental, residential and business entity that calls the Keys home. The financial burden and the political burden will need to be shared. We are well past the “who or what is to blame” stage. We are well past “not my problem.” Sargassum has the potential to destroy our ecosystems and damage our most important revenue stream.

Ranger Ed and I did a quick walkabout of five Atlantic-facing Key West beaches on this week’s rainy Tuesday morning. Here’s what we found:

Look, sargassum in the summer is normal, as any long-timer will tell you. Heck, even Christopher Columbus wrote about seeing it floating in the Atlantic’s Sargasso Sea (hence, the name). We need sargassum. The floating golden brown carpets of sea algae are safe nurseries for fish and turtles. But, what we have now is not the Sargasso Sea variety with which we are familiar. Since 2011, the sargassum piling up on Caribbean beaches has come from a massive algae bloom off Brazil’s coast. The sheer volume makes clean-up impossible. And the same volume is suffocating the turtles and fish and putting the ocean’s oxygen levels at risk.

Every seaside beach in the Caribbean, western Mexico and into the Gulf of Mexico is swearing at this “new” sargassum — and helpless to do much about it. Even if taxpayers were to agree to fund massive, multi-times-per-day clean ups that trucked away sargassum on the sand, we’d not make a dent in what’s waiting in the water to wash ashore. We cannot pretend it isn’t happening. We cannot say a dismissive “there, there” to folks raising concerns.

These outsized algae blooms, in great measure a product of climate change and disastrous environmental disregard, eventually will kill our summer beach time. Locals already know to forego our beaches most summer days. One of these days, our visitors will, too.