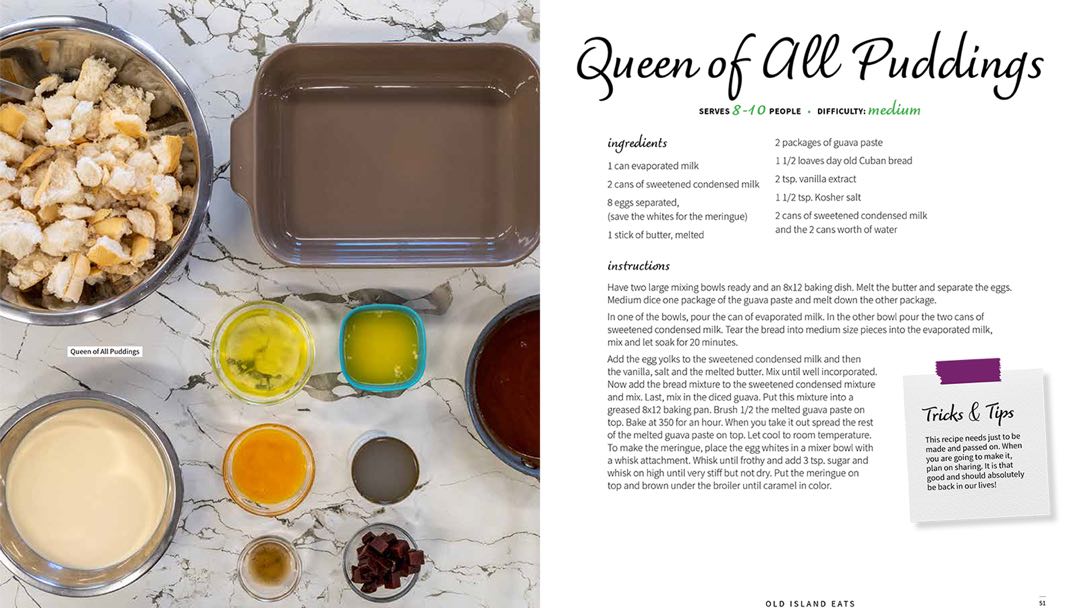 Queen of All Puddings or Key Lime Pie? The Queen wins

By the time I was 10, cooking dinner for seven was, well, a piece of cake. (Sorry about that.) Sharp knives; hot stove. Boiling water and fry pans. I was the oldest of five under eight; mom needed a hand and I had two.

She wasn’t what I’d call an adventurous cook but she taught me my way around the kitchen. There was enough grocery money for the basics and I learned a lot about the one-pot, everything-left-in-the refrigerator cooking that kept us fed. One grandmother offered up bread-making skills (she baked every day.) The other showed me the joys of mixing sugar, eggs, butter and flour.

Which brings me to the Queen of All Puddings. It’s a Key West-Bahamian-Cuban-inspired guava bread pudding topped with meringue or whipped cream. Go ahead; argue the merits. Plain or topped, I don’t give a hoot. It’s all about the pudding.

If ever there were the quintessential “dear heavens, folks are coming to dinner expecting dessert and what the heck do I have on hand to fix” recipe, the Queen of All Puddings is it. Cuban bread (or crackers in a pinch)? Check. Eggs? Check; even if we have to steal from the chickens in the yard these days. Butter, sweetened condensed milk, evaporated milk. And, in Key West, guava. Paste, fresh, jarred, marmalade or canned. A boatload of it.

Why Queen of All Puddings isn’t as ubiquitous as Key Lime Pie on every local restaurant dessert menu is a mystery. It’s cheap and easy to make in huge quantities. A little goes a long way, although I’ve been known to take a spoon and shovel it out of the dish. It’s got decent shelf life, though fresh from the oven is best, and it freezes OK.

My guess? There’s no Queen of All Puddings equivalent of Kermit’s on the corner or marketing guy extraordinaire David Sloan. (I did find a Paul Menta recipe for the Queen, so at least Google can find one Key West connection.)

Key West’s Queen of All Puddings is not to be confused with the British Queen of Puddings, which, depending on your recipe history, was so-named because Queen Victoria loved it or because its meringue topping looked like a crown. No, today we’re talking about the Queen of ALL Puddings. (PS: It’s also not guava duff; different recipe; good though.)

I was Covid-years-old when Williams Hall Culinary Director Martha Hubbard introduced me to the Queen of All Puddings. I cooked along with Martha’s online classes during the Covid years, which Ranger Ed says was the best thing that came out of Covid. Not Martha, although she’s priceless. He meant my cooking.

A couple months after I made my first Queen of All Puddings, I went to the Shade and Shutter Gallery on White Street and bought a Mark Klammer hand-crafted ceramic baking dish worthy of the Queen. When not in use, the dish holds shells on the front porch. (It’s Key West; everything needs to multitask.)

The Queen of All Puddings is one of several Key West historic recipes that have fallen away as folks do less from-scratch cooking at home and too many restaurants rely on not-on-premise-made desserts — even upon occasion the Key Lime Pie.

Saving the Queen of All Puddings

There’s hope, if we pay attention, that we might not lose our island food heritage. Even before 1960, when it created the Old Island Restoration Foundation, the Key West Woman’s Club has collected those old recipes and distributed them in cookbooks.

Martha includes many of them, exactly as written with notes for today’s cooks, in her new cooking workbook, Old Island Eats, due out this spring. That’s where you’ll find the island’s original Queen of All Puddings recipe, along with, among others, bollos, Conch fritters and Key West piccadillo.

Conch Analise Andrews, owner of Key West Food Tours, combines storytelling and authentic Key West recipes on her extraordinarily popular food tours of locally-owned businesses. Analise was the guest speaker for the Key West Art and Historical Society (KWAHS) aboard the Argo Navis last week. I listened to her for an hour and would promise to make her a Queen of All Puddings if she’ll keep talking.

On March 1, KWAHS holds its annual Conch Revival Picnic at the lighthouse. Chefs Martha Hubbard and Dave Furman of Great Events Catering will do the honors with those historic recipes. The Blue Paper has a good story about the first picnic in 2016. The first time I went I passed up the dessert table. Too many calories and thought I was ambivalent about guava.

Now? Just give me the serving spoon. There’s a reason it’s called the Queen of ALL Puddings.

PS: I have no pictures of the Queens of All Puddings I’ve made. Hard to believe in these days when everyone takes pictures of their food. Guess I’ll need to make one this week.